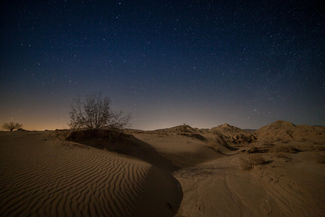 Editor's Note: This article was originally prepared as part of Anza-Borrego Foundation's annual fundraising appeal. It has been edited for the Borrego Sun.

ABF is the only nonprofit organization dedicated to supporting Anza-Borrego Desert State Park. As partners with the park, ABF programs include land conservation, adult and youth education and research that leads to greater understanding and appreciation of California's dwindling wilderness as well as funding support of the park visitor center.

Even 60 years ago, the glaring lights of big cities masked the wonders of the night sky.

It was something I discovered in the spring of 1958 when a bunch of Boy Scouts left San Diego to camp in the desert and look for the newest heavenly wonder.

The world was fascinated by Sputnik, the first artificial satellite launched by the Russians in the fall of 1957. Our goal was to see it as it passed overhead in the dark spring sky.

We did see the tiny satellite, about the size of a beach ball and weighing less than 200 pounds. Even more importantly I saw much more, discovering the overpowering grandeur of a night sky filled with wonders I had never seen before. To this day, I am fascinated by the night sky and the many objects there that have been seen by man since time began.

We piled into the back of a stake bed truck on top of our packs and sleeping bags for the trip to the desert. Imagine doing that today?

But little did I realize that this was the start of an adventure that has lasted a lifetime.

That first moment, away from the dimming glare of city lights, I discovered the cosmos through an unfiltered sky.

The passing of Sputnik was a momentary thrill, but the hanging clouds of the Milky Way were captivating. Untainted by light pollution and perhaps amplified by the dry, clear atmosphere of the desert sky, the scene was mesmerizing.

This captivation is not uncommon.

It might surprise you to learn that on any dark sky night, especially in summer when the Milky is up, there are hundreds of sky gazers who flock to Anza-Borrego to enjoy the vast heavenly expanse and clear viewing.

As this is being written, park visitors are limited to day-use only because of COVID-19, so travel into remote park locations is not currently allowed at night. But there are plenty of places, even roadside turnouts, that offer safe locations to set up a chair and a telescope, or to simply sit and look at the wonders above.

There is another dimension to consider. I grew up learning about the constellations such as Orion the hunter, Scorpio the scorpion, the Big and Little Dippers, Leo the Lion and Cygnus the Swan. But the original people of the region had their own interpretations of the night sky.

They saw mountain sheep, snakes, ravens, buzzards and other animals, along with ceremonial objects significant to their culture.

These people of the earth were completely in tune with the heavens and sensitive to the movements of the sun, planets and stars.

The constellations were a cultural tool used to teach young people important lessons passed down during puberty ceremonies.

Anza-Borrego Desert State Park has helped preserve both the ancient and the modern views of the universe.

Efforts to designate Borrego Springs as a dark sky community and the park as one of the very few dark sky parks have helped maintain the purity of sky viewing. This was accomplished through community effort to limit night lighting and the creation of development standards that was sensitive to the types and placement of lighting.

As spring transitions into summer, the Milky Way climbs nightly in the eastern sky, providing viewers with a breathtaking view unimaginable to anyone who has not seen it.

During annual meteor showers, the clear atmosphere allows viewers to see even the faintest flashes as tiny grains of meteorites burn up in our atmosphere. Some of the best meteor showers are the annual Perseid display peaking this year on August 11 – 12, and the Geminids, peaking on December 13 – 14. Lesser showers happen throughout the year and are best view when there is no moonlight.

Modern cameras allow the sky lover to capture incredible starlight scenes, with the brilliant blanket of stars hanging over the curdled landscape of our desert, or even the momentary flash of a meteor entering earth's atmosphere. These moments under a brilliant night sky can be a time of deep introspection or self-discovery as one sits quietly and ponders the magnitude of the universe and our place in it.

In a seemingly limitless expanse that Anza-Borrego provides, one can sit in the silent darkness under a blanket of stars and let the mind wander to infinity.

That doesn't happen in the cities. Thank heavens it does in California's largest state park.