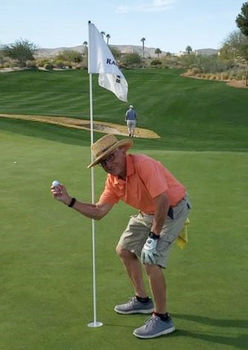 On the morning of Feb. 18 at Rams Hill, little did anyone know it would be such "a momentous day," according to Richard Dopp.

He took 22 putts on the first eight holes, then aced the 9th hole from 133 yards using a Nike graphite 7-iron and a Nike Mogo ball. The shot cleared the left bunker, landed on the green, rolled, and plop!

At 80 years old and playing regularly for 25 years, it was Dopp's second ace, witnessed by his friends from Canada – Gary Hilton, Glen Smyrl, and Barry Anderson.