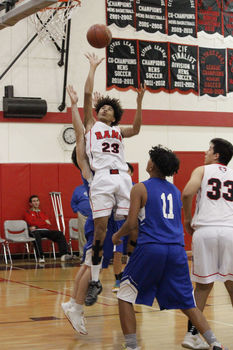 The result of the game was not what the Rams basketball team pictured for their last game at home, but their efforts did not go unnoticed. Despite not being able to take a lead against a well-rounded Bonsall team, the Rams fought it out until the last second of the game.

The Rams looked like they could pull out a comeback, but the deficit was just too much, as they lost, 57 – 45.

"We started off really slow, very lethargic, I'm not sure exactly why things didn't click at the time. We didn't try anything new, but it seems like nothing was working. It might be the end of the season kind of thing," head coach Mauricio Polanco said.

"The second half they came together more as a team and were able to put more pressure on and cut the deficit. I was very proud of their effort."

The team also faced the West Shores Wildcats in their final game of the season, and lost 65 – 46.

The regular season did not go as planed, but Polanco says the future is still bright.

The Legionnaires were on the board first with a three-pointer, 3 – 0, and scored back-to-back layups, holding the Rams scoreless until midway through.

Forwards junior Saul Magdaleno and senior Andres Reyes sank in a free throw each to get within three, 7 – 4.

Then the game turned into a three-point contest, as both teams exchanged shots behind the arc, but the Rams still trailed, 13 – 7.

The Legionnaires continued where they left off into the second quarter, and connected with the basket much more efficiently.

Reyes broke their run with a drive through the paint, past two defenders to put up a shot.

Junior guard Blaine Shugart then sank in a three, but was answered back with a layup.

Midway through the second, White sank in free throws to cut the deficit.

Both teams went back-and-forth down the court, as tensions began to rise.

It was a quick start to the third quarter, as Bonsall got on the board quick.

Midway through the third, Jambor did not give up under the paint, picking up the rebound, 41 – 22.

Shugart again found the basket with another three, 41 – 25.

However, the Bonsall offense could not be stopped, as they continued to extend their lead.

To begin the fourth, there Shugart was sinking in another shot behind the arc, 52 –31.

The Rams tried their best to get points on the board with consecutive free throws, and a nice senior connection by White to Reyes, but still trailed 53 – 38.

Midway through the fourth, sophomore forward Daniel Arias got in to the three's with one of his own, 53 – 41.

With three minutes left, the Rams managed to score a couple of more times, but the Legionnaires didn't give them a chance to get too close, resulting in the loss.

After the game was wrapped up, the Rams honored their two seniors Ty White and Andres Reyes.

"Great leadership, really going to miss them both. Next year, obviously Ty is a guard, so it's crucial to lose one of the top key guys and Andres being our big guy, who can post up and shoot from the outside as well. I'm going to miss those guys. Outside of the court, in the classroom, they're excellent students, and leaders so I'll miss that, but they have a bright future ahead.," Polanco said.

As basketball season comes to an end, Polanco says the goal remains the same, to notch in more wins, but to help the players grow.

"Overall, we have a lot more loss-es than I would have liked to have, but it's a great group of guys, very proud of them. They gave their full effort every single game, so that's all you can really ask for as a coach."