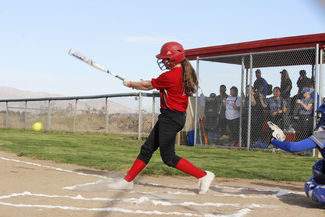 The Lady Rams softball team opened up its season against the Hamilton Lady Bobcats with a big 26 – 7, mercy-rule win at home.

With the solid start at the mound and the backup of the infield gave a nice hand for the Lady Rams, as they put up nine runs in the first inning, nearly going through the lineup twice. This provided a good cushion to back up the pitching of sophomore Brianna Del Bono, who was given the nod to start on the mound.

Del Bono walked the first batter she faced, but got the next three on strikeouts. Then the Lady Rams came to play, taking advantage of the new freshman Lady Bobcats pitcher.

With back-to-back walks to start the bottom of the first inning, a wild pitch sent a runner home for a 1 – 0 lead. Then it was like base running practice for the Lady Rams, who took advantage of miscues by the Lady Bobcats.

A single down the middle by shortstop junior Marla Manzano helped bring in a run, and eventually got her to steal home, 3 – 0.

Sophomore second baseman Isabel Arteaga singled to bring in another to extend the score to 4 – 0.

Consecutive walks and wild pitches, as well as going back to the top of the lineup gave the Lady Rams a hefty 9 – 0 lead in the first.

Both teams were held scoreless in the second, but the Lady Bobcats were finally on the board in the top of the third inning.

After getting the batter to strike out looking, followed by back-to-back walks, the Lady Bobcats managed to bring in a runner home, but still trailed, 9 – 1.

The Lady Rams answered right back in the bottom of the third with 10 runs, once again going through the lineup.

The Lady Bobcats made a pitching change, but that did not stop the Lady Rams from bringing in the runs.

Back-to-back singles by Del Bono and sophomore center fielder Angelina Sanchez and a walk to senior first baseman Delaney Barclay loaded the bases for Manzano. She had no problem bringing in a run home.

Junior third baseman Daniela Carmona brought in a couple of more and the runs kept going.

However, the Lady Bobcats made a few changes in their lineup, putting in their big guns in hopes of a comeback. Their starters did not begin the game, due to a game the day before.

With a hit down left center, just a bit short from going over the fence for a home run, the Lady Bobcats began the top of the fourth with a triple. That was just enough for the a single down the middle to bring the runner in, 19 – 2.

After a few miscues and a walk, bases were loaded, and runs began to come in. It seemed the Lady Bobcats found Del Bono's strike zone. But a sweet double play ended the inning, 19 – 7.

As if their lead wasn't enough, the Lady Rams had an answer for all those runs they gave up, and everyone in the lineup once again got to see the batters box. At the end of the inning, the Lady Rams led, 26 – 7.

The Lady Bobcats could not come up with any more runs in the top of the fifth, and the game ended on a mercy rule.

Despite a solid victory to open up the season, the Lady Rams have much more to improve on as the season goes on.

The two teams face off once again, this time over the hill, as the Lady Rams hope to keep their hot streak going.

As for the Lady Bobcats, it seems they hope to avenge their loss, and with healthy starters are looking at a different outcome. Game is set for Friday March 6, 3:30 p.m.