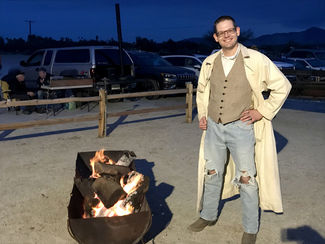 This year's contestants made the March 7 Pegleg Smith Liars' Contest one of the best ever. The judges added up their point scores and found they had a tie for first place for tales about Leprechauns and gold at the end of the rainbow, and a curse in a family tree traced through Ancestry.com.

Second place faired the same with two winners also, as the judges found the story of the government turtle breeding program on equal footing with a Pegleg tale that involved the late Liar's Contest emcee and historian Phil Brigandi.

The Borrego Springs American Legion proved once again to be a great venue with $5 spaghetti dinners, shelter from the wind, an inviting campfire, a great sound system with music, and hilarious tales enjoyed by an audience of over 100 people.

Okie McNatt stepped in as the new emcee. Judges Jim McKenna, Rick Dobbins, and Nate Marsh used a point system in their judging that includes points for originality, costumes, presentation, audience reaction, and of course, including the real Thomas Long "Pegleg" Smith while deducting points for mentioning the fictitious Pegleg Pete. All contestants were awarded trophies and certificates of participation.

Brigandi passed away this past December, but his presence was clearly felt when David Daniels appeared in his trademark vest, duster, and torn jeans, and paid homage to this beloved historian who loved capturing the real stories of those he interviewed to piece together histories of Lost Valley, Borrego, and Orange County.

Later in the evening, David told a winning tale in true Brigandi-style that earned him the tie for second place when he described how Pegleg wandered north to Angel's Camp where frogs were being trained for the Calaveras frog jumping contest. There, he met Phil Brigandi and together they traveled to Lost Valley where they are still searching for, not gold, but a lost mica mine. The other winning tales include:

Gold at the end of the rainbow

Germar Bernhard enthralled the audience with his story of how he found a map in Julian indicating where rainbows are found. Not really believing in the fairy tale of gold at the end of the rainbow, he was surprised when the map did indeed lead him to a pot of gold and a feisty leprechaun who he paid off with a fistful of greenbacks. Now with a fever to find more gold, he realized he would not be able to go to the other locations on the map because they were at higher elevations.

Because he suffered from "Pegalitis," a wasting disease of the leg, he could not climb the mountains. It was then that Germar realized that Pegleg had the same problem. Pegleg told tales of his lost mine so that people would pay him to lead them to his mine, but he was such a Scrooge he would never say where the mine was because he never trusted anyone. He became so poor that he sold his map for a nickel so that he could buy a piece of Julian Pie before he died, and it was that map that Germar had purchased in Julian.

With that in mind, Germar has decided to sell his map and is entertaining bids of $100,000 and up as he still has to pay off the leprechaun so that he does not end up in leprechaun purgatory, which is worse than hell. Germar contends that bidders have nothing to lose because the stock market is in free fall and everyone will lose their assets anyway. But if you buy the map, Germar can pay off the leprechaun, and the purchaser will be able to follow the map up into the mountains where the rainbow ends.

With that pot of gold, one can become the richest man or woman in the world – richer than Michael Bloomberg –and can buy campaign ads for $10 billion dollars rather than half-a-billion and become president. You need to act fast before St. Patrick's Day March 17. Only U.S. dollars are accepted, not Euros or Mexican pesos because the only currency a leprechaun will accept is green.

Carol Hake had the facts about why the government has a secret turtle breeding program, working in conjunction with the San Diego Zoo. It is also the real reason why the Pegleg Liar's Contest was moved from the Pegleg Monument to its current location at the American Legion. The government has known all along that Pegleg's gold is really under the Pegleg Monument and that it would draw attention to that fact if they brought in large equipment to move the rocks. Instead, they developed a plan of how to get the gold without anyone realizing what they were doing.

They first had to buy the private property around the monument and make it part of Anza-Borrego Desert State Park. Then they had to make sure that the annual Pegleg Liar's Contest would move to a new location. They did this by first demanding that CACTI – the Committee to Accumulate Curious Tales of Incredibility – take out a $1 million insurance policy to hold the annual event. Then they stated that the contest could not be held without the presence of a state park ranger, and of course, it was not guaranteed that a state park ranger would be available. Once CACTI made the decision to move the event to the American Legion, the government was clear to carry through with their plan to get Pegleg's gold without anyone noticing it.

They began their turtle breeding program to develop the slowest possible moving turtles, the goal being to breed turtles that can move at the rate of one inch per year. Once this goal is achieved, then each of the rocks piled high on the monument could be epoxied to a turtle shell. In 30 years, the rock pile will move about two-and-a-half feet and the rangers will be able to pick up the gold without anyone noticing what is going on.

A contestant named Beulah (Carol McKenna) discovers through DNA testing with Ancestry.com that she is the great granddaughter of Pegleg Smith, which might explain a curious genetic defect in the family with all the boys born with a withered left leg. Beulah researched her family tree and shared this tale:

They called him that when he lost his leg

A poor mountaineer, miner, and a thief

Looking for the gold that gave him much grief

Then one day he stumbled to the ground.

It was there, amongst the rocks he had found.

He knew he better hide it somewhere.

He thought California was the place to go

So, he loaded up the mules and moved to

He buried the gold in a keg of beer

He chose a place not far from here

When he came to retrieve his gold

He searched and searched 'til he was very old.

I found that gold. And broke the curse,

Put all the money in my purse.

All the boys grew back a leg

We celebrated drinking that keg

I want to give thanks to all of you,

The judges and all the liars too.

You're all invited back again

To have your shot, lyin' about my kin.