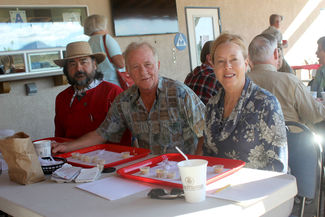 The competition was stiff, the six entries were worthy of any fine dining "gravy experience," especially for breakfast fare involving biscuits, and the three judges invited for the evaluation came to the same conclusion as a clear majority of the 60-plus folks who showed up on March 8 at the American Legion post for the annual gravy contest: ChrisAnn Wells makes the best gravy in Borrego Springs!

There were three guest judges at the event – Dale Jones, Cindy Wood, and myself. We took our jobs very seriously, and I was concerned to the point of paranoia that we would award first place to a gravy deemed unworthy by the general public; confirmation was a must that my septuagenarian taste buds were still in fine shape.

In the totally blind judging event, we sampled the six gravy entries brought to us on trays (each gravy had a number) while the crowd waited patiently. Some gravies were mild, some spicy, and others chunky, or a combination. We then came up with a unanimous first and second place, but struggled third. It took a re-sampling of the other four entries to come up with a split decision, with Dale Jones casting the deciding vote.

We gave the results to gravy contest organizer's Dana Dempsey and Jana Cate, followed by gravy enthusiasts lining up for their trays of six numbered entries, plus six tickets. They put three tickets in the numbered sack for their favorite, two tickets for second and one ticket for third. The sacks were then secreted off to the Legion office, tallied by Post Commander Rick Dobbins, recounted by judge Jones, and overseen by myself.

Once the winners were known, I was relieved beyond words that the People's Choice for both first and second place were the same as the judges' choices. ChrisAnn Wells won first, Vanessa Bravo won a well-deserved second place, and while we judges voted third place to Kendall's Café, the people voted for Gary Saunders. The judges went two-for-three on conformance with public preference, so that eliminated my aforementioned paranoia. While all the entries were tasty, some were clearly better than others.

For her winning entry, Wells crafted a gravy combination that was at once calm and friendly passing under the nostrils, tasty but not overwhelmingly spicy as it passed across the taste buds, and very smooth going down, all the while leaving room to appreciate the subtle taste of the biscuit underlayment; remember, it's called Biscuits & Gravy on all the menus, not Gravy & Biscuits.

The Motley Crew then proceeded to serve up a great breakfast of scrambled eggs, fruit cocktail, and coffee. Of course, a delicious offering of Biscuits & Gravy, including the entry from our recently annointed Gravy Queen, ChrisAnn Wells.