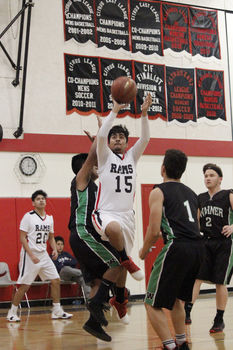 The fourth quarter was a definite game changer. With back-and-forth lead exchanges, to missed opportunities, and a comeback for the season. However, the game ended not the way the Rams JV boys' basketball team would have wanted it to be.

The team faced the Warner Springs Wildcats Jan. 30 at home, which ended in a 34 – 32 defeat, despite leading the game in double digits most of the game.

It's a loss in the books, yes, but to head coach Tim White, it's a sure learning experience for the team.

"The kids started the game off amazing. But I really love the effort and the kids are growing everyday so that's what it's all about at the JV level. So I'm very pleased and very happy. Obviously, I don't want to lose anything, winning is fun, but we had a good time and the kids got better, that's the main part," White said.

The team was short handed at this game, as a few of their players were up on the varsity team, and unable to play in the next JV game.

The Rams managed to take control early in the game, with back-to-back jump shots by freshman guard Angel Vilchis to get the Rams up 4 – 0.

The Wildcats sank in a free throw, but were answered right back with shots by sophomore center Moses Garcia and freshman forward Julio Medina to lead 8 – 1.

In the last minute of the first, the Wildcats got within three, 8 – 5.

The speed of the game was picked up in the second quarter with both teams going back-and-forth down the court with the Wildcats trying to stay in the game as close as possible.

With 6:45 on the clock in the second, Vilchis and Medina put up consecutive floaters to keep the lead, and the Rams were up 12 – 9.

Midway through the quarter, the Wildcats managed to gain some momentum, shifting in their favor on offense and defense.

The Rams found themselves only up 18 – 13 heading into halftime.

The third quarter was better for the Rams, as they extended their lead into double digits.

Junior guard Miguel Garcia put up a floater in the same spot to add to the lead.

Midway through the third, both teams went back-and-forth, but the Rams held the lead going into the fourth, 29 – 17.

The fourth quarter was a shaky one for the Rams, as the Wildcats clawed their way back in.

However, the Wildcats managed to foul out Moses Garcia, the big guy in the paint, and broke down the Rams' defense to weave their way through.

"We had six guys out there, our center Moses, if he doesn't foul out, we would probably win that game," White said.

The lead was no more, as the game was tied at 32 with less than two minutes to go in the game.

The Rams offense just could not connect enough to get to the basket to regain the lead.

After two missed free throws to the tie the game for the Rams, they still had one last shot, and with about four seconds on the clock, it was all or nothing.

But the lob to get across the court was just too hard, and the Rams dropped the game.

"The kids are still trying to figure plays out this late in the season when they should have those down, so that needs to change," White said. "Defensively, just little things like boxing out and getting those rebounds, but for the most part I was pretty happy, despite running into some foul trouble."

The Rams are back on the court 3 p.m. Feb. 7 at home for their last game of the season against Vincent Memorial.