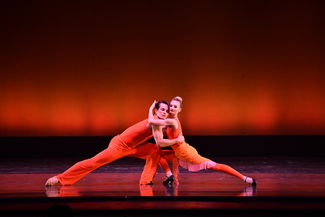 What a performance! The City Ballet of San Diego came to town on Feb. 7, bringing 14 top dancers (and about three dozen dancers in all) who used the colors of the rainbow in eye-catching costuming, together with their artistry and physical prowess to dazzle the eyes of a nearly full house of admirers at the Performing Arts Center.

Short solos demonstrated classical ballet and freestyle movements with joyful individual expression; pairs revealed precision and strength with their spins and lifts; and the ensemble dancers performed magically in colorful costumes covering the entire rainbow. This was a repeat performance, originally done by City Ballet in 2012, and obviously a highly popular production.

Iago Breshi was back for his third appearance at BSPAC, and he did his solo, duet, and ensemble work like no other. His combination of strength and precision of movement, plus an inclination to unselfishly show off a partner to best artistic advantage all helped make a feast for the eyes.

For Ariana Gonzalez, her out-ward delicate appearance quickly revealed her inner physical conditioning, powerfully smooth as silk and always in command of her onstage presence. She, Breshi, and the entire ensemble showed that beneath a facade of effortlessness is a ton of long, hard work and sheer talent.

The artistic extravaganza, Adventures in Color, consumed all of Act II, and it played exceptionally well. There was onstage narration prior to each presentation of the colors – green, purple, orange, blue, yellow, and red – each representing a different style of dance but with familiar feelings and emotions (i.e., green is for envy) captured by the dancers. The choreography was simply spectacular.

The dance numbers grew ever more complicated throughout the show, dancers giving their all in pursuit of artistic expression; precision timing was also in play when a group of male and female dancers, all of different heights, leapt in the air and then gracefully landed with an impressive single "thump."

Photography was not allowed, so you had to be there to admire the colors and choreography, not to mention outstanding solo and group performances by an ensemble of very talented dancers in this ballet troupe. From unforced smiles on their faces, some dancers were clearly having fun up there, and the audience was duly entertained and appreciative of the entire performance.