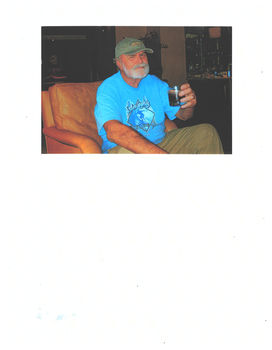 Dave married his sweetheart, Genie Wolf in 1966. They were very fortunate to have 53 lovely years together. He was a kind and caring man, with a great sense of humor. As one friend so eloquently stated, he was a "Gentle Giant."

Dave enjoyed traveling throughout the United States and Europe with his family. He was owner/operator of several unique businesses in La Jolla during his years there. He was also a fabulous artist, woodworker, and cabinet maker, which led him to create much sought after furniture and beautiful paintings.

One of his pieces that Borregans see everyday is the big blue sign, "Carlees." Through the years, he also entered as many paintings and pieces of art in Borrego Springs annual, Circle of Art."

Dave obtained his General Contractors license in 1981, and beginning in 1984 built homes in the Sun Gold area. Upon retiring, he utilized his time helping other local contractors. Also in later years, his joy was tending to his garden and being "Dad" to our friend's furry pets.

To my beloved Dave, husband and best friend, may you rest in peace. You will be missed by your family and friends.