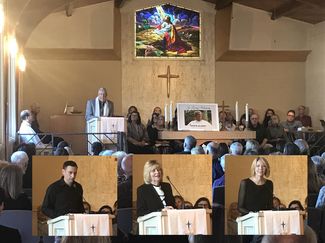 For the close-knit community of Borrego Springs, the death of Chuck Blandy in a motorcycle accident two days before Christmas came as a shock to all. Chuck was 66 years young. As a plumber, he served Borrego well, as did his father before him. And as a devoted and loving husband to his wife of 42 years, Sheila, father to Brian, brother to Kelly and June, and grandfather to Maya with another on the way, Chuck served them too, by being the best he could be.

At the memorial service on Jan. 11 held at the Methodist Church, an overflow crowd of nearly 130 people mourned the loss of a local man loved by his family, respected by his community, and who was devoted to his Christian faith. The $10,000 goal on GoFundMe to help defray funeral costs had been quickly met, and then exceeded by Borregans who knew Chuck and mourned his sudden loss.

Brian, Kelly, and June spoke fondly and emotionally about their life experiences with Chuck. Brian remembered one of many surfing outings when dear old dad went head over heels on a big wave. A nearby surfer asked Brian, "Did you see that old guy go over the falls?" Brian replied, in sympathy yet with some degree of pride, "Yeah, that was my dad."

Chuck's eldest sister Kelly reminisced about earlier times too, such as when Chuck was playing the Christmas pageant role of Father Pedro Font at the Methodist Church. Font was the official chaplain, observer, and diarist on the de Anza expeditions of 1775 – 76, and the lookout point in the Badlands is named after him. Chuck wasn't wearing sandals to go with his burlap robe and rope belt, and he was forced to wear women's sandals.

Kelly said it's probably the reason he never wore sandals again. She concluded with, "Chuck, take a look at all those gathered here today, praising your memory, mourning your death. Our hearts are broken because you left us much too soon, but we can take some comfort in the memories we have. Your soul might be up in heaven right now, but I'm pretty sure your spirit will always be in Borrego."

June spoke of both the pain of Chuck's loss and the joy that his life brought to his family, regretting like many in such a situation the missed opportunities to do or say something, like simply picking up the phone and giving him a call or sending a text. But those thoughts need to be banished, she said, and replaced by the memories of "good times, the laughter, the times we did get together, and the conversations" to best honor her brother. Memories of balancing on a cable spool left out in the desert; walking on stilts Chuck made for the kids; or his acrobatic tricks on the trapeze hanging from the carport.

The mix of pathos and humor during the memorial reflected the life of a loving, kind, and generous family man who also loved Borrego and his fellow Borregans.

Chuck Blandy will be missed by all who knew him.