A Blanket of Snow Brings Crowds Back to Julian 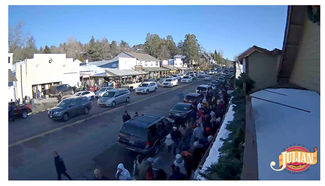 Julian was treated again to a snow-covered holiday weekend. The snow fell early the day after Christmas and blanketed the entire mountain region. With the arrival of snow, many in the San Diego County made their way to the mountain area for sledding and snow ball throwing.

The treacherous weather on Thursday caused several roads leading to Julian and Mount Laguna to be either closed to traffic or at the very least required chains. By Friday, the roads were clear, the weather was perfect and there was still plenty of snow on the ground. The sunny weather by the weekend melted some of the snow however, there was still plenty of snow in most areas.

Visitors to Julian experienced long lines on the roads as well as in the stores and restaurants. While waiting for the traffic to inch along, many would get out and play in the snow right off of the highways. Then once in Julian, parking was in short supply. It appeared as though every available piece of space was taken up by a vehicle. The streets surrounding the small town were packed with cars parked in multiple directions. The already narrow streets became even more precarious with cars, snow and pedestrians. Most restaurants had a two hour wait and there were multiple lines for apple pie. All of the businesses were packed with customers and hopefully experiencing huge sales numbers.

Julian residents are very aware of the draw that the snow brings and brace for the crowds each time the prospect of snow shows up in weather reports. Unfortunately, the small town can get extremely overwhelmed rather quickly. The sidewalks were so crowded due to lines at restaurants and pie shops, that people were spilling into Main Street. Visitors left trash and there were even reports of some sledding in the local cemetery.

More than likely there will be more opportunities for snow in the mountains this winter. Those planning to visit Julian should be aware of weather and road conditions, bring warm clothing and be prepared to wait.

There are many resources for visitors to take advantage of before making the drive. The Julian Chamber of Commerce and Pioneer Museum webcams offer visitors a view of Julian. The Chamber has Instagram and Facebook pages (@visitjulian) which list businesses that are open during snowy days and other updates.