An Evening of One Act Plays 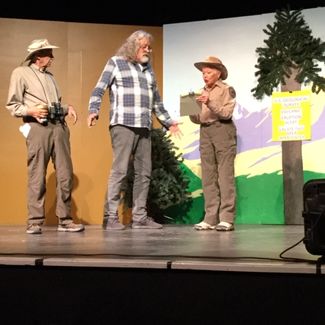 On behalf of the Borrego Springs Performing Art Center, Fred Jee welcomed an enthusiastic audience for an evening of five one act plays written and directed by Michael Sadler. "ELECTICA" featuring a crew of twenty hardworking, energetic locals is the third event for the season.

Since 2006, Michael Sadler's plays have become well known, including "Don't Ask, Don't Tell" the 2008 Festival Winner at "ShowOff!" An Honorable Mention with a stage reading for "Estate Sale" was also a winner at the Camino Real Playhouse's international playwriting festival in San Juan Capistrano.

Inspired by life, Michael's plays included comedy and drama throughout the evening with the first item titled "The Ashes of Frank Delaney." This play was a finalist in the 2007 Lakeshore (Wisconsin) Players 10 minute Play Competition, starring none-other than Hal Cohen, Craig Johnson and Diane McCalvey. Procrastination took its toll when two buddies finally travel to a mountaintop to scatter the ashes of a mutual friend and confronted by a Park Ranger.

"Restore Point" was a story of betrayal after trust and focused on a computer glitch that introduced the theory of a time warp as a possible phenomena in today's world of confusion. Well done, Gary Edwards and Kaitlen Caruso.

Elaine Hazelrigg, Richard Dopp, Marie Hasselbring, Jean Johnson, John Young and Jay Hazelrigg gave the audience an hilarious rendition into the antics of a con man selling fake antiques. He meets his match in the form of a British Cockney woman with a vast knowledge of arcane subjects.

A beautiful and touching performance followed with the next play, when Jesus Rangel played a young man with a learning disability and appeared to be making steady improvements on his cognitive skills. He put to the test his caretakers, Jenny and Gary Edwards who planned to move away. An aspect of life that would not be very far from reality.

For the final play, "End of Scene" gave the audience a classic story of a crusty theater producer who must stage a play starring the daughter of a wealthy investor. She doesn't have a clue what theater is all about. Kaitlen Caruso and Craig Johnson kept the audience intrigued as to what the outcome would be.

All in all, Producer Elaine Hazelrigg, Stage Manager and Set Construction: Jay Hazelrigg, Lighting and Sound: Daniel Caruso and Graphic artist: Advil Dara gave the audience a really professional performance. Thank you Michael Sadler for bringing your talents to Borrego. Your excellence and sense of humor was refreshing, most enjoyable and enlightening.