The Challenge of Eclectic Golf 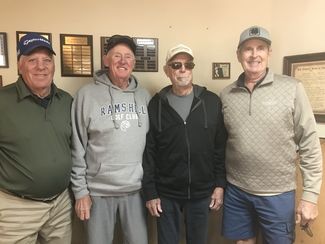 It's an odd format for a game that usually gives a golfer only one chance at playing a single hole. Called an Eclectic, golfers get two chances on consecutive days to first make and then improve upon their score for a given hole.

So hail to the two pairs of winners, Mike McCalvy & Barrie Little and Tom Schaible & Ray Carle, for their 13- and 18-stroke improvement, respectively, finishing with total net scores of 100. Way to go, guys.

For optimistic golfers like myself and my partner Dan Slade, we began on Day-1 with the hope that we'd hit 'em stiff and make birdies on lots of holes, or at least make pars, and then leave our competitors in the dust on Day-2 with even more birdies or convert bogeys-to-pars.

We finished with a 16-stroke improvement, only five strokes behind the eventual winners, but with two teams tied for the win and three for second place, we were a relatively distant fourth! A tin medal, perhaps, but buffed to remove the shine.

We all had pizza and beer to celebrate, and there were other winners for Closest to the Pin and surprisingly lots of chip-ins.

For me and Dan Slade, however, both of those mini-contests of accuracy count "close" as the same as out of bounds.

In short, we all had a great time out there, and we hope to help make this a great season of golf for all.