RoadRunner Club Mixer: Bringing Out the Best in Some of Us 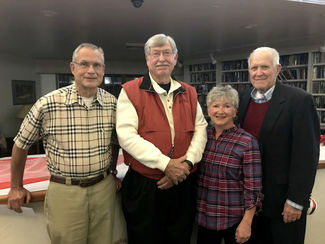 Congratulations are in order for Charlie Cutler, Ron Crenshaw, Lynnette Salton, and Ken Cragoe, the winning team at the RoadRunner Club Golf Mixer on Dec. 12, sponsored by the Women's Golf Club.

The foursome's combined net score after handicaps was 184, a whopping 32 strokes under (par = 216). Their faces beamed and smiled big at their win, and all the golfers and guests then settled in for a great dinner of salad, chicken, mashed potatoes, veggies, and rolls, plus chocolate cake for dessert, all catered by Kendall's Café.

My three teammates and I, however, had to settle for not coming in last. We thought our net score of 14-under par was in contention, but after careful consideration of my own performance, I can see why we were not crowned with the laurels of victory, or even close to it. I'm not saying that I alone could have made up the 18-stroke difference had I been playing at the top of my game, but it was close.

Let me cite but one representative example. We paid $2 for 2 mulligans, to be used anywhere at anytime during play. Early in the round, I had a four-foot putt and missed it right. I decided to use up a mully, confident I would make it on my second attempt. Missed it again, this time left.

It took only several nanoseconds to make the decision, based mostly on ego, to use my last mully to make this one lousy putt. Yes, friends and neighbors, I missed again.

After that, I was jinxed by my own sharp drop-off in confidence, and I subsequently had a horrible game. And how I managed on Hole #12, given an uphill, curving putt on the steepest and most treacherous part of the green, from 15 feet away, to make birdie was, I must admit, not anywhere related to skill but to sheer blind luck.

Other than that, with all our joking around, Nancy, Ralph, Marcie and I all had a great time out there because, win or lose, there's no such thing as a bad day of golf in Borrego Springs.