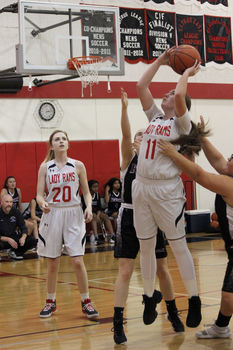 After holding the Lady Warriors of Rock Academy to just three points in the first half, the Borrego Springs girls basketball team continued its undefeated streak, with a 39 – 14 win Friday Dec. 4 at home.

"It's always tough coming off of a break where we didn't do much besides open gym during Thanksgiving holiday, but I'm very impressed with the girls' efforts and energy tonight," head coach Tim White said.

"It was surprising, I thought the Rock was going to give us a bigger challenge than they did, but at the same time I was very excited to be able to give players meaningful playing time throughout the course of the game not just at the end of the game, and still come out with a really nice win against a quality opponent.

The team also faced the Hamilton Lady Bobcats, which took place after print.

In the game against Rock Academy, the Lady Rams were on the board quickly, after a rebound by junior forward Laurynn Strate, 2 – 0.

Senior center and forward Delaney Barclay added to their lead after back-to-back jumpers in the paint, 6 – 0.

The Lady Warriors cut their deficit in half after a layup and a free throw, 6 – 3. However, that's all they would get until the second half. Despite an aggressive Rock Academy press defense, the Lady Rams knew how to break it down enough to add to the board.

Barclay sank in two free throws to begin the second quarter, and was followed by a floater by junior guard Marla Manzano, 14 – 3.

With a couple of trips to the free throw line and jump shots over defenders in the key, the Lady Rams headed into the locker room with a solid 26 – 3 lead.

It was slow on both sides of the court, and it seemed the Lady Warriors found a way to hold the Lady Rams from adding to the board. The Lady Rams managed to only score two points.

Midway through the third, Rock Academy sank in a couple of free throws and jump shots, and were still down, 28 – 10.

In the fourth, Rock Academy continued right where they left off, 28 – 13.

Midway through the fourth quarter, Manzano forced a foul and sank in a free throw. She then hit a jumper at the top of the key, 31 – 13.

After a steal, junior guard Baylyn Villafana drove up past a defender for a layup forcing the foul. Villafana sank in the free throw to complete the three-point play, 34 – 13.

A shot at the top of the key by Manzano and a jump shot by junior forward Jenny Sencion extended the Lady Rams lead, 39 – 13. The Lady Warriors got one last free throw with a minute left, however, it was not enough, as the Lady Rams won 39 – 14.

Despite the win, there is always something to improve on, and White hopes to work on boxing out and spacial awareness.

"We're running down the court with our head looking at the spot we need to get to or if we're dribbling the ball, so a lot of little things," he said.

"Some big things we need to get a handle on are our defense. The Rock played man against us, and we haven't really put anything to go against a man-defense, so I was really proud of the girls for adjusting on the fly and being coachable and making those adjustments in being successful tonight against a defense we haven't really practiced against."

As the season progresses, White's mindset for the rest of the season is to just get better.

"I just want them to try to get better everyday and every time we have a chance in the game obviously to get better and get the dub, which the girls are very capable of doing. I want to help build their confidence, be building our repertoire on offense and defense and having more tools on in our tool box to play in the game," White said.

The Lady Rams are back on the court Friday Dec. 13, 3:45 p.m. in an away non-conference game against Calvary Christian Academy.

The two teams faced each other in the first game of the season back in November, where the Lady Rams won 35 – 20.