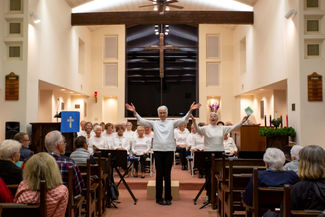 The "Celebrating Christ at Christmas" concert at St. Barnabas Episcopal Church, spread out over three performances Dec. 6 – 8, was a truly magnificent combination of vocal and instrumental soloists, full choir, chimes, and narration, all combined to get folks well into the spiritual mood for the holidays ahead.

Under the exquisite direction of Jinny Perrin, 29 sopranos and tenors and altos and bass vocalists all contributed to a solemn yet emotionally stirring overall performance. Borrego Springs Performing Arts Center Artistic Director George Keith was solid as narrator between musical numbers, and Richard Helving was his usual consistently great and unflappable self at the piano.

It began with tenor Gary Edwards walking down the center aisle singing his soft and eloquent rendition of "I Wonder as I Wander." It is a song written in the key of E, using every one of those semi-mysterious black keys on a piano. With frequent transition from flats to sharps, and back again, it's a difficult vocal performance to get right. Edwards did just that. But what was truly amazing was that he did it while singing the entire piece a capella. The man performed admirably without a net.

We next heard the 12-member Chime Choir perform "Silent Night" and "Sing We Now of Christmas." Now there's an instrument that looks easy to play but isn't, given that each chime plays only one note, with 12 to choose from among several octaves of pitch.

But it's the rhythm and stop/start changes that can be problematic while first chiming, then pressing it against one's body to dampen the reverb. The dexterity exhibited by the Chime Choir while keeping up with the melody was superb.

Two other great solos were performed in the same song, "The Advent Rose," where Reverend Son Ye's tenor voice soared strong and pure, accompanied by a virtuoso performance on flute by Jennie Edwards.

What was truly amazing about this overall performance, start to finish, was the way in which Perrin managed to organize the array of vocal ranges of choir members at her disposal.

Starting with relatively soft and quiet individual stylings, the songs "evolved" in their power, harmonic complexity, and vocal range, always seeming to build into a very emotionally charged and musically dramatic crescendo. Our hearts literally soared in tandem with the choir voices.

Audience participation was also on the program, and in one song using alternating choir-only versus choir-audience augmented verses, it took but one such switch before getting the crystal clear sense we'd all much rather hear from the choir, with their soaring and magnificent harmonies, rather than our own attempts at vocalization, feeble by comparison. Sure, we all love to sing, but sometimes it's best left to a group like this choir to show off a bit with their true abundance of great talent.

Summing up, it was a unique and powerful Christmas performance.