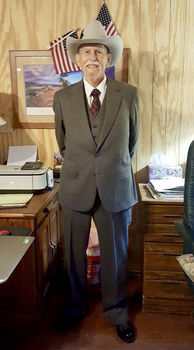 Lester Erroll Levie moved from this earth to Heaven on September 28, 2019. He was almost 94 years old.

Les' life was full of ups and downs. He had many failures alongside his victories, but he lived life in one gear: straight ahead. He saw one of the first motorcars in America as a child, flew 25 missions in the War in the Pacific and received the Presidential Unit Citation and Air Medals, helped build Las Vegas, rode his horse in the Tournament of Roses Parade, flew a plane in a Tears For Fears music video, kept company with western movie stars, and took the trail on horseback with many friends.

Les was so many things, but what he loved most was Jesus. His favorite Bible verse was John 5:24, "Truly, truly, I say to you, he who hears My word, and believes Him who sent Me, has eternal life, and does not come into judgment, but has passed out of death to life."

And now Les has passed from this life, through death, to life everlasting.

A memorial service was held at the Borrego Springs Christian Center on October 12, 2019. A special thanks to American Legion post 853 for their beautiful contribution. The service can be viewed on YouTube on the ccborrego channel.