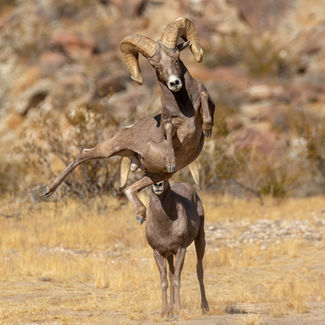 They don't migrate, but Anza-Borrego's magnificent bighorn sheep do move around and have been putting on quite a show to residents and visitors. And it's not just a random thing.

Like any wild animal, bighorn sheep move around to find food and water. In the dry environment of Borrego Springs, that can mean some significant changes in location throughout the year.

State parks environmental scientist Michael Puzzo coordinates the annual bighorn sheep count in Anza-Borrego and knows a lot about the factors of sheep movement and what impacts them.

As most people who have looked for sheep know, Palm Canyon is a dependable area to spot the animals, and that's because the canyon is a reliable source of water, which is not going to likely change.

As hot summers and long periods without rain shrink water sources, however, sheep begin to look elsewhere. Food sources are also impacted by hot summers and fall or early winter, many of the plants that sheep depend on for food have withered.

Puzzo provided a California Department of Fish and Wildlife report that helped explain why more bighorn sheep are being seen around De Anza.

"This change in foraging behavior may have been due to the lack of monsoon rains that used to occur in August each year and provided a green up after the long dry summer months," she said.

This trend continued, and by 2012 it was not unusual to see up to 30 sheep grazing at De Anza between September and December.

If you recall, there were significant August rainstorms in 2013 and as a result, sheep were rarely seen at De Anza during the fall months.

"Since 2014, the number of sheep that use De Anza has increased and the amount of time sheep spend in the community each day has increased as well based on data obtained from GPS-collared ewes," Colby points out.

The canyon washes and vegetation-rich alluvial fans at the toe of the San Ysidro Mountains have always been very important for the bighorn sheep, but in times of Drought they are even more critical to survival.

Puzzo said the 90 volunteers that conduct the 49th annual census recorded 273 sheep, compared to 255 the year before.

He said this year's count confirmed that herd numbers are stable.

"Of course, the count is a snapshot in time, but it looks like herd numbers are stable and we didn't see anything of concern," Puzzo said.

Overall, it is estimated that somewhere about 1,000 bighorn sheep occupy the range that extends from the Mexican Border north into San Bernardino.