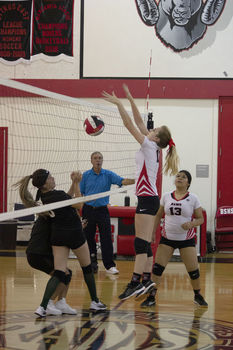 Junior Laurynn Strate attempts for a block at the net.

The JV Lady Rams volleyball team went head-to-head against our over the hill neighbors, Warner Springs in a Southern Manzanita League matchup Sept. 24.

Despite a rough first set start for the Lady Rams, they were able to take the game 2 – 1.

The two teams faced each other once again, this time at Warner Springs, which took place after print.

The team won their first league game of the season, 2 – 1, the week before against Calipatria, and remain undefeated on the season.

Errors cost the Lady Rams' lead, and found themselves down 13 – 8.

However, that lead wasn't safe, as the Lady Rams managed to tie the game at 14.

Despite great rallies by the Lady Rams, Warner sealed the first set, 25 – 23.

Both teams kept the score close to begin the second set.

The Lady Rams' found a lead to build on, after three consecutive aces by junior Celeste Fernandez, 11 – 7.

Back-and-forth both teams went, in attempts to take the game, the Lady Rams' took control of the set, winning 25 – 14.

The third set was a bit of a nail biter, as both teams wanted the win. Miscues and errors by both teams put them at a crossroads.

What surely helped was the strong forces of serves by the Lady Rams, who continued to be on a roll with ace upon ace.

Not to mention the great saves and hits by the team, the aces helped seal the win, 15 – 5.

The JV team is back in action against the Lady Scots of Vincent Memorial Oct. 3, 4 p.m.