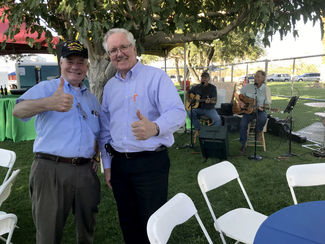 They came to Christmas Circle, sipped wine and beer, ate sliders, all of them ready to participate in the next morning's 2019 Borrego Days Desert Festival and Parade.

Chamber of Commerce Secretary and Borrego Days Co-Chair Debbie Woollet welcomed the crowd that trickled in-and-out but totaled to more than 100, and she began by handing out a special award to Ranchita's Dr. Cy Conrad for his contribution of automobiles and drivers for the many Parades in this and previous Borrego Days Festivals.

San Diego County District 5 Supervisor Jim Desmond was effusive in his praise for the Borrego Community, and he was also grateful to be selected as our parade's Grand Marshal. With wife Kerri by his side, Desmond mingled with the crowd, talking shop and engaging in casual conversation with his constituents. He said later he looked forward to working closely with community leaders and stakeholder groups involved with his Revitalization initiative.

State Assemblyman Randy Voepel was on hand to greet the crowd, and he was proud of his legislation, AB 391, amending the California vehicle code to reduce the five-day waiting period to 72 hours for filing with law enforcement a stolen rental/leased vehicle report. The law also permits the rental/leasing agency to telephone the renter directly as opposed to sending a snail-mail letter.

La Casa del Zorro's Patrick Sampson, who announced his stepping down from both the General Manager position at La Casa and Chamber of Commerce Board President, said it was time to move on. Sampson is moving back home to Las Vegas, and opined, however jokingly, that he might pick up a sideline job as an Uber driver

Clint Brandin, Chamber of Commerce board member for about a year now, was elevated to the position of President.

La Casa's Sales Manager and Parade Co-Team Leader Kasey Simrock, looking as bright-eyed and enthusiastic as ever, was quietly confident that the parade would be a success. The Chamber saved $25 to $30,000 dollars on the Parade & Festival budget by using all volunteers instead of a high-priced consultants, so Simrock and co-chair Maggie Walters had their work cut out for them. They did not disappoint.

Finally, Borrego Sun publisher Patrick Meehan was on hand to provide the latest target date for the opening of The Propeller, his newly refurbished restaurant at the Borrego Airport. It's coming, folks.