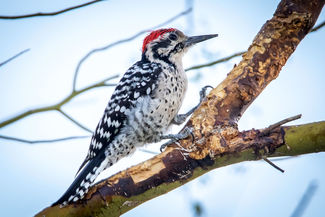 Anyone with sand in their shoes from wandering about the desert will tell you there are some unique plants and animals only found here. Ocotillo and cactus, native palms, sidewinder rattlesnakes, bighorn sheep, various lizards and birds are just a few of the species found only in our desert.

One of those birds is a ladder-backed woodpecker and that doesn't seem quite right. Typically, woodpeckers are associated with oak woodlands or forests filled with tall trees.

I was hiking through the typical desert scrub environment of upper Coyote Canyon when I spotted what I first thought was a Nuttall's woodpecker. Looking closer, I realized this was something different. This was my first encounter with what turned out to be one of our unique desert dwellers.

The ladder-backed woodpecker is sometimes referred to as the cactus woodpecker because it's a resident of the more arid regions of the southwest and often encountered in unlikely places such a creosote bushes or cactus patches. The deserts of San Diego are the western fringe of this bird's range.

As fall and winter bring more comfortable temperatures to San Diego's deserts, birders may encounter the ladder-backed as they explore the western slopes of Anza-Borrego Desert State Park.

Here, the rocky hillsides are dotted with agave, creosote and cactus patches where this woodpecker can be found feeding and nesting. Since my initial encounter, however, I have spotted them in palo verde trees and large cottonwoods at the edge of Coyote Creek and foraging in trees around the state park visitor in Borrego Springs.

The easy confusion about this woodpecker is understandable because of their similarity to the Nuttall's. While the ladder-backed is similar in size and markings, it has significantly less black on the face and upper back.

The ladder-backed could also be confused with a Downy woodpecker that is common to San Diego County and has similar coloration and markings. Downy, however has stronger black markings and a white breast without spots. Males have only a tiny red patch on the nape.

Our desert woodpecker is described as a smaller bird, measuring about seven inches in length with adults having barred black and white back and tail.

There is a solid black line through the eye with an additional black line below the eye extending back from the beak. The breast is mostly white with smaller black spots.

Males have a red crown extending back to the nape, while females do not have any red crown feathers.

Like many woodpeckers they will nest in tree cavities, often cottonwoods, desert willows, or agave stalks.

The ladder-backed woodpecker's range extends from the deserts of southeast California into Arizona, New Mexico and Texas and well south into Mexico.

If you are looking for another bird to add to your life list, keep an eye out while in the desert for the ladder-backed woodpecker.