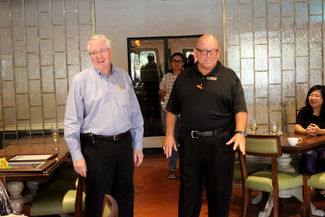 Curly Williams was announced as the new Resident Manager of La Casa Del Zorro at Patrick Sampson's surprise going away party. Sampson, who recently stepped down as GM and as the Chamber of Commerce Board President, was certainly surprised by the guests in attendance at the party held in the Fox Den on Monday Oct. 21, organized by La Casa's Sales Director Kasey Simrock. On conditions of absolute secrecy by the guests, Sampson stepped through the Den's portico and was surprised by La Casa staff, Chamber of Commerce members, community leaders, and friends. He was joined shortly by wife Tiffany.

Sampson has been La Casa's GM since 2013 with 30 years of experience managing hotels and resorts in Las Vegas and northern California. He's been a Chamber of Commerce member since 2013 and served as Board President for last three years.

An official "Proclamation Honoring Patrick Sampson" was presented to Sampson on Oct. 19 by County Supervisor Jim Desmond, who referred to La Casa as "a hidden gem in San Diego County located in the 600,000 acre Anza-Borrego Desert State Park." Desmond championed Sampson for, among other achievements, the "Fluffy Fox Charity Fund," with proceeds supporting Borrego Springs charity and community groups.

Desmond also notes in the Proclamation that Sampson is "known to be helpful, accommodating, highly professional and knows everything about Borrego Springs, and the County of San Diego is committed to recognizing and honoring those individuals who are dedicated to the best ideals of public service." Director Linda Haddock waxed eloquent on Sampson's time with the Chamber Board and as a valuable member of the Borrego community,and she wished Sampson and his wife Tiffany all the best as they pick up stakes and move to Las Vegas.

Kasey Simrock later wrote, "Patrick Sampson gave me the opportunity to not only learn the business of hospitality, but he has also shaped my Sales Career into a place I could have never done alone."

Simrock will be expanding her duties to include event bookings, entertainment and media relations, while Williams will handle resort operations and maintenance.

"Sampson's favorite motivational quote was from the famous Muhammad Ali, "Float like a Butterfly and Sting like a Bee." We will continue to work in the Resort with such attitude," Simrock said. When Sampson took the microphone, he injected his trademark impish British humor into remarks concerning his impending transition across state lines with a now not-so-secret desire upon arrival in Las Vegas – to be an Uber driver.

There he said he hopes to make "up to $600 a night driving around foreign tourists" while playing music on "cassette tapes" targeted to their particular nation of origin and associated musical tastes in order to enhance their ride. Out of respect for the man, no one challenged his choice of audio media all but extinct by the turn of the century. It will probably take Sampson a while to move up to more recent developments in audio technology, all the while perhaps driving around Las Vegas in a vintage four-door Ford Anglia, a car once used "across the pond" that ended production in the late-60's.

On a more somber note, Sampson thanked the gathered guests and reminded everyone at the resort complex built in the early-1930's, "Eighty five-year old buildings are fine, but it's people who make a difference."

After speeches, it was time to get even more serious with delicious cake and refreshments.

It was great having you here, Patrick Sampson, and thanks for all you've done for the community of Borrego Springs.