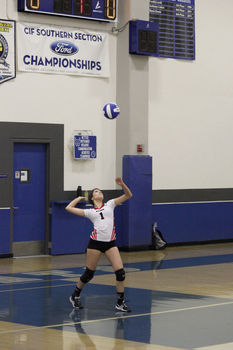 The Lady Rams JV volleyball team looked to keep their winning streak alive and stay undefeated, as they faced off against the Lady Bobcats of Hamilton once again on Aug. 29.

This was the second time the teams faced off against each other in a span of nine days.

In the teams second meeting, the Lady Bobcats sure did their homework and made the Lady Rams work a bit harder to get the win. They took advantage of the miscues, but it was not enough to pull a win past the Lady Rams, as the they took the win in back-to-back sets, 25 – 14, 25 – 22.

In the first set, both teams went back-and-forth for the lead, then after little mistakes, the Lady Rams found themselves down, 12 – 9.

However, the team managed to take the lead after aces by sophomore Angelina Sanchez, 13 –12.

The Lady Bobcats were only able to get two points after that, as the Lady Rams found a rhythm to follow. Junior Yudania Ornelas was on a serving streak with consistent aces, and a hit by junior Jenny Sencion gave the Rams the lead. A communication error by the Lady Bobcats sealed the first set win for the Lady Rams, 25 – 14.

The Lady Rams were down early to begin the second set. With much back-and-forth by both teams, the Lady Rams led 7 – 6. However, unlike the first set, the Lady Bobcats capitalized on the little mistakes made by the Lady Rams. No lead was safe, as it was any teams set.

Tensions ran high as the score was cutting close. With a score of 20 – 20 on the board, both teams rallied to take that lead.

With the combination of hitting errors, and back-to-back aces by sophomore Isabel Arteaga, the Lady Rams took the set, 25- 22, and the game.

Despite the win and extending their win streak, the Lady Rams have much to work on for their upcoming games this season.

The two teams faced each other once again for the last time this season on Sept. 3, as the Lady Rams' first opened their season at home, which took place after print.

The Lady Rams JV team is back in action 4 p.m. Sept. 17 against Calipatria at home.