Battle of The Springs Stays in Borrego 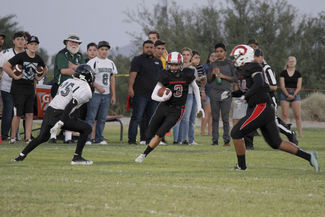 Senior defensive lineman and tight end Andres Reyes gets ready for the block to assist sophomore linebacker and running back Cesar Ochoa to gain yardage.

The Borrego Springs football team kicked off the 2019 – 20 season with the friendly rivalry game of "Battle of the Springs" against Warner Springs Aug. 30.

Rightfully so, as the bronze/silver Springs trophy stayed right here in Borrego, as the Rams bested the Wildcats, 69 – 40.

"Warner posed a great threat tonight. We thought we had them down in the beginning of the game, got some young kids some quality playing time and allowed them to come back a little bit, but hats off to them, they got a bunch of warriors who battled really hard," head coach Tim White said. "I'm proud of my kids for keeping that trophy here at home."

Our reigning Citrus League Champions have a new opponent pool going into the new season, while still facing some familiar ones.

The team also faced Desert Chapel, a team they have never played before, in its first away game of the season Sept. 5, hoping to keep the momentum going, but lost 40 – 6. They did bounce back the week after against Horizon Prep, winning 47 – 24. This was also the Rams' first league game.

"It was a great team effort against a courageous Horizon Prep team," Tim White said, as the Lions only suited out eight total players. He applauded the Lions hard work from start to finish.

The Rams held the Lions scoreless in the first half, 28 – 0.

In the second half, the Lions made some adjustments, and managed to get back into the game, and scored 24 points.

"I'm proud of how we responded to the adversity to finish strong," he said.

Senior quarterback and linebacker Ty White finished the game 14-for-22 for 193 yards, with one passing touchdown and one rushing touchdown. On the defensive side, he finished with 13 tackles, 1.5 sacks and an interception.

Senior guard and linebacker Ulices Vilches had two touchdowns and nine tackles; sophomore running back Even Padilla had 176 total yards and a touchdown; junior defensive back and wide receiver Gabe Milyard returned a kick return for a 93-yard touchdown; sophomore linebacker and running back Cesar Ochoa had 11 tackles and an interception.

In the first quarter against the Wildcats, the Rams were on the board to start things off after a 35-yard pass from Ty White to senior defensive lineman and tight end Andres Reyes who was open on the right side of the end zone. The extra point was no good, but the Rams were still up 6 – 0.

The Wildcats answered right back and took the lead after a long 45-yard pass, and a quarterback keeper for the two-point conversion, 8 – 6.

Ochoa and Padilla helped the offense move the chains with big runs, breaking through tackles left-and-right.

Halfway through the first quarter, 6:15 on the clock, senior linebacker and running back Octavio Delgado ran for a 25-yard touchdown down the sideline while making sure not to step out of bounds. Ochoa ran the ball down the middle for the two-point conversion, putting the Rams up, 14 – 8.

The defense held the Wildcats back with continuous blocks in the backfield and back-to-back hits by Viches.

The Rams picked up their momentum to begin the second quarter with a 45-yard carry by Ochoa, who swerved around the field to find the gaps left open by the Wildcats.

With minor flags bringing the Rams back a few yards, that didn't stop the ability of Ty White to read the defense. A shuffle pass to Ochoa from 15 yards out for the touchdown, and the extra-point was good, Rams led 21 – 8.

It didn't take long for the Rams to get on the board right after that with a tip drill by Reyes, leading to an interception by junior offensive linebacker Saul Magdaleno on the 40-yard line, up 28 – 8.

The defense were able to stop the Wildcats on their next possession, and midway through the second quarter, the Rams were on the board once again on a quarterback keeper, plus the extra point, put the Rams up 35 – 8.

With 1:49 left in the half, the Wildcats managed to get back in the game with a touchdown down the middle. Their attempts for a two-point conversion was no good, and were down, 35 – 14.

With the clock running down and 12 seconds on the clock, Ty White ran in for the touchdown and the extra point was good as the Rams went into halftime up 42 – 14.

Both teams went back-and-forth to begin the third quarter, not being able to put points up on the board.

With 6:44 on the clock, the Wildcats were able to break that no score Drought with an 8-yard touchdown pass, and a two-point conversion, but still trailed 42– 22.

On the kickoff return, Milyard found open field before being tackled by two defenders at the 15-yard line.

The offense continued to push the ball forward, and the Rams managed to get in another touchdown, but the extra-point was no good. They still led, 48 – 22.

The Wildcats chipped away at their deficit and scored two touchdowns before the end of the third quarter, 48 – 34.

To begin the fourth, the Rams got two touchdowns back to begin the quarter.

Ty White ran in for a two-yard touchdown, followed by an interception by Milyard, 62 – 34.

Midway through the fourth, the Wildcats found the end zone that was wide open for a touchdown. But another two-point conversion attempt was no good, as they still trailed 62 – 40.

That would be all that they get, as the Rams scored two more touchdowns, sealing the win, 69 – 40.

"Those kids put it all out there on the field, it's hard to pinpoint one or two kids. All those starters on both sides really deserve the credit – from the line to the backfield," Tim White said.

The Rams are back at home Friday Sept. 20 to face familiar foe, Foothills Christian. If many remember, this is the team that knocked our Rams out of the playoffs last season. White said he is excited to host Foothills Christian for the first time here in Borrego, and hopes for a better outcome.

"I don't think they've been here in September so we're hoping it's not too hot, but still pretty hot for them, and looking forward to a battle," he said. "We're using these games leading up to it as an opportunity to grow and get better so that when we get that huge challenge Foothills will present, hopefully we're ready and prepared for them."