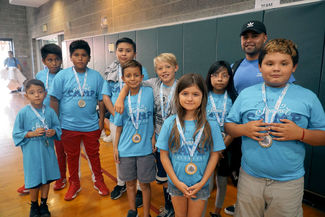 Over 600 children from all over the San Diego County participated in this year's Boys and Girls Club of Greater San Diego's Olympic-styled day-long event.

The Club has been putting this on for the last 22 summers, and each one continues to be better than ever.

This year's competition was held at the Boys and Girls Club in 4S Ranch. Clubs from all over the County were represented, including Borrego Springs.

The Club held an Olympic style opening ceremony, carrying banners and representing their invidiual Boys and Girls Club, with team announcements blaring through the speakers.

It sure was a day of fun, filled with crafts, team-building, games, and friendships. Many of the children said they are looking forward to next year. But everyone, including the counselors and the volunteers, stressed the importance of learning sportsmanship.

"The whole idea here is sportsmanship," Michelle Malin, Vice President of Development for the Boys and Girls Club, said. "That's the most prestigious trophy at the end of the day. It gets passed around. We want the kids to be competitive, but we want them to have a good time."