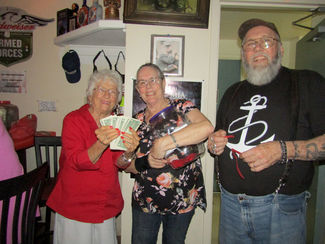 Veterans representing all branches of our military attended this Independence Day celebration.

There were no fireworks outside due to the lack of funds and space this year, but the fireworks indoors, were much more patriotic, beautiful and amazing in bravery and soul than anything manufactured could ever display.

It is a service to ourselves to honor our military veterans and take the time to talk with them, especially those who are young. You will learn pride, respect and history for and of America and the men and women who have kept you safe in the "Land of the Free and the Home of the Brave"

This year, the VFW's Independence Day celebration began at 3 p.m.

A vast variety of delicious pot-luck foods were put out and enjoyed by all in attendance, followed by a fabulous blueberry cake with a blueberry cream cheese filling.

When all taste buds and tummy's were satisfied, the raffle drawings began.

The 50/50 drawing was won by Claudette Castillo. The basket raffled off was won by Steve who donated it back for another person to win, as he was leaving town the next day.

Thank you to Post Commander, Chris Klontz, Teri Klontz, Janet, the community, and our Military Veterans for making this Independence Day celebration meaningful and fun.