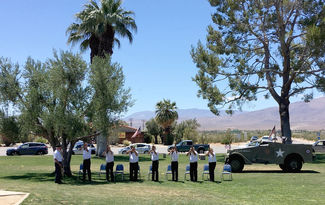 A hundred or so Borregans gathered on a mild Spring day May 27 at Christmas Circle, to help remind us all of the ultimate sacrifice so many have given in service to America.

The event started with a posting of Colors, the Pledge of Allegiance, and our National Anthem sung by singer/guitarist Rob Mehl. It then moved to a special recognition of three World War II veterans in attendance – Larry Dukes (Army Air Force) and Hal Hawkins (Marine Corps), both serving in Iwo Jima at the same time, and Les Levi, Bubble Gunner on a B-17.

Colorado Desert District Superintendent Gina Moran walked through the crowd with an American flag, sent home to the family of World War II veteran Bob Gruber, buried in an unknown foreign cemetery. Mehl accompanied Moran's procession with the Trace Adkins song, "I Made it to Arlington." "For the things I've done, I can rest in peace; I'm one of the chosen ones – I made it to Arlington."

Bobren later noted that in Borrego, May has been designated by the Legion as Poppy Month, culminating on Memorial Day with the work product of veterans who raise money by making fabric-based poppies, passed out at the event. She ended her comments with what has become their motto at the Legion, "Freedom blooms when veterans are served."

Larry Bowen began his remarks with the reading of a the poem by Andrea Brett from Branson, Missouri: "I Am a Veteran," on what it means to serve the country.

"You may not know me the first time we meet. I'm just another you see on the street. But I am the reason you walk and breathe free. I am the reason for your liberty. I AM A VETERAN..."

Folks who pass a vet on the street are probably unaware he/she missed some of life's important events – such as family gatherings, or Christmas at home – while protecting their freedoms. Or following commands that lead to deaths of fellow soldiers and enemy alike.

Bill Fink of the Sons of the American Legion, (sons and grandsons of qualifying veterans) pointed out the Sons are the fourth arm of the Legion, as with the others, a nonprofit focused on veteran causes and community. The other three being the Legion (honorably discharged war era veterans), the Auxiliary (wives and daughters of qualified veterans), and the American Legion Riders (motorcycle riding members of the Legion, Auxiliary and Sons).

The Sons are all volunteers helping out in the community, assisting veterans in coping with various issues, including raising money for a host of programs.

Fink reminded attendees that not everyone dies on the battlefield, relating one example of his wife's late husband, a dog handler and point man in Vietnam, who succumbed to cancer following his exposure to Agent Orange.

Mehl then performed a service medley, honoring each of the branches of the military – Army, Navy, Marines, Air Force, and Coast Guard.

The Keynote Speaker of the event was Legion Chaplain Larry Hofer, who asked the question, "What does a hero look like?" The answer was surprising: Mr. Rogers of TV's "Neighborhood" fame.

Rogers wore a sweater to conceal numerous tattoos emblazoned on his arms while serving as a U.S. Navy Seal in Vietnam – with 25 enemy kills to his name – and he was a master of hand-to-hand combat and small arms.

"Yes, that Mr. Rogers," Hofer said. "He didn't look like it, but he was a true American hero."

Chaplain Hofer went on to quote one definition: "A hero is someone who has given his or her life for something bigger than oneself."

Since the founding of our country, with 1.3 million men and women making the ultimate sacrifice for our freedoms, Memorial Day is one of the most patriotic of American observances – remembering and celebrating those "who died defending our freedom and our democracy." Chaplain Hofer's brother, 18 years old at the time, made the ultimate sacrifice in Vietnam, and his only wish was to serve his country and defend our freedoms.

"Many didn't come home," Chaplain Hofer said, "and that's what this day is all about."

The crowd then sang, "God Bless America," followed by the chaplains' prayer by Hofer. The always impressive 21-gun salute was timed to perfection by the Legion's color guard, and the ceremony ended with a soulful rendition of "Taps" on the bugle.

Following the ceremony, folks were invited to the American Legion post for a free lunch, with cheeseburgers prepared by the experienced hands of Dave McCleerey, plus more music by Rob Mehl.

All in all, it was a memorable day indeed.