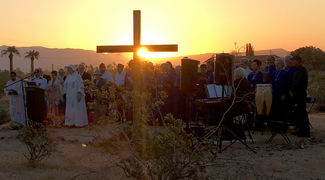 Just after 6 a.m. on Sunday, April 28, 2019, almost 200 people gathered on the hill behind Community Methodist Church on Church lane. Rarely do Borregans assemble that early in the morning. But this was not for hawk watching or a special hike. There were readings from the New Testament and Psalm 118, culminating in the gospel of John 20: 1-9. This is the description of a disciple of Jesus, Mary Magdalene, going very early, while it was still dark, to the tomb where Jesus’ body had been placed after his death on the cross. But she found the stone closing the tomb removed. Only after running to Peter and another disciple who raced there too did it become clear. The tomb was empty. The body was gone. The burial clothes were rolled up. Only a little later did Mary encounter Jesus, raised from death, and she became the “apostle to the apostles,” telling them Jesus was risen, was alive.

That was the first Easter. But ever since, followers of Jesus have sought to remember the last week of his life, from Palm Sunday’s joyful entrance to Jerusalem through the last supper on Holy Thursday, to the crucifixion on Good Friday and Jesus’ burial. The churches in Borrego celebrated all these.

So the gathering, and the waiting for sunrise and then the prayers, hymns and readings on the hill behind the Methodist church are a reliving of that first Easter, early on the first day of the week. This service, open to everyone, is sponsored each year by the Borrego Ministers’ Association. This is the circle of clergy from the town that also sponsor the Thanksgiving service, the Christmas Concert, “Ashes-to-go,” on Ash Wednesday, as well as contributing to the Food Bank and many other acts of outreach in the community.

This year the clergy leading the service included the Rev. Laura Brecht, rector of St. Barnabas Episcopal Church, chaplains Dale Jones and Larry Hofer from American Legion Post 853, the Rev. Son Ye, pastor of Community Methodist, Pres. Jeff Walsten and Br. Geoff Barton of the Church of Jesus Christ of Latter Day Saints, with other clergy also present. Fr. Fernando Maldonado of St. Richard Catholic Church preached the sermon. Jinny Perrin of Community Methodist and Trent Hoskins-Kleinkopf of St. Barnabas led a choir from all the churches in the anthem, “Christ Has Arisen.” Ernie Loza spoke at the end of the service on the ongoing ministry at Slab City and Martha Deichler described the Borrego Ministers’ Association and their cooperative work for the entire Borrego community.

Years and years after the events of the first Easter, the Borrego sunrise service attracts hundreds who bring their seating and join in the singing and prayers. It is more than the remembrance of an historical event. It is the reliving of that event and the experience of new life and freedom the rising of Jesus bring. May all of the community sense some of the joy in the faces and words and deeds of those who gathered there on the hill and in all the Borrego churches on that holy day.