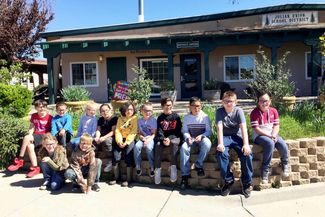 Every year, schools around the country need to perform mandated vision screenings for particular grades. From these screenings, parents are alerted to their child's vision needs. This year, children at Julian Union Elementary School District were able to not only have a vision screening, but those that needed a more extensive vision exam received it along with a free pair of glasses!

She heard about the Shiley Eye Institute's Eyemobile program and quickly got JUESD signed up. The Eyemobile provides vision screenings at schools throughout the San Diego County. Their mission is "to give young, underserved children the vision they need to succeed in school and in life by identifying, treating, and preventing visiondisorders."

When the Eyemobile learned about the District's student demographics and needs, they were more than excited to come out to the school.

So in December, two vision screeners from Eyemobile visited the elementary school and performed 177 screenings in a single day. Students filed into the school's multipurpose room and lined up to have their vision tested with state of the art equipment. Those who failed the test received a letter from the school, and an offer to have a more extensive screening when the Eyemobile came back out.

For two days in March, the Eyemobile recreational vehicle made its way to the campus, and parked on the playground area. The students were instantly intrigued by the colorful addition and were eager to get a chance to see the inside.

The RV is a selfcontained mobile optometry office complete with all of the necessary testing apparatus. Although some students were nervous about the process and having their eyes dilated, the Eyemobile staff made sure child was comfortable.

Ward commented, "We were so lucky to have the Eyemobile visit our school district. So many of our children were in desperate need of glasses. This program provided them with an exam and glasses that they would have otherwise missed out on. It's such a wonderful service and the Eyemobile staff was great!"

In April, the students received their glasses and proudly wore them in class. They were so excited to be able to see better in class and one student even commented that he could now clearly see Volcan Mountain.

Julian Pathways, Inc. and the Julian Elementary School District students would like to extend their heartfelt appreciation for the UCSD Shiley Eye Institute.