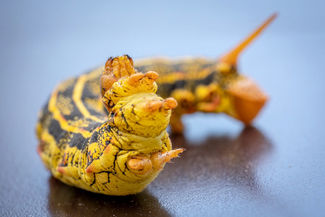 There's more to the wildflower Super Bloom than meets the eye.

The casual observer who only sees the vast fields of spring blooms is likely to miss another one of Nature's wonders known as the Sphinx Moth Caterpillar.

When winter storms bring abundant rainfall and an epic spring wildflower show, a visual symphony begins that includes performers like the wildflowers, insects, migrating birds and, of course, the caterpillars.

Water is life, especially in the desert, and when conditions are right, not only do the flowers prosper, but the huge Sphinx moth emerges from underground where it may have waited years for the perfect entrance.

This large month, sometimes known as a hummingbird moth because of its size and a habit of hovering over flowers to feed, is often seen buzzing about the spring blooms.

Their arrival marks the beginning another life cycle, with the moths soon laying eggs on the underside of leaves.

These eggs will hatch in two to five weeks into colorful caterpillars that feast upon the tender blossoms and fresh, green foliage of the wildflowers. The hearty food source means the caterpillars can rapidly grow to nearly four inches in length and as thick as your little finger.

As large as they are, you would think they would be quite easy to find, but their color, ranging from black to green, with yellow stripes, can allow them to easily blend into the vegetation where they are feeding.

Also known as hornworms because of a large horn-like spike at their tail, the caterpillars can devour a field of flowers in a day or two. They can also do a lot of damage to your veggie garden.

But in the natural cycle, the Sphinx caterpillars are also an important food source for migrating Swainson's hawks, now passing through Borrego on their long spring journey from southern South America to northern North America.

During a good wildflower year, Borrego will see record numbers of Swainson's hawks because of the rich supply of high protein caterpillars.

During the Super Bloom of 2017, I encountered thousands of Sphinx caterpillars in the sands of San Felipe Wash.

They are emerging now and taking their toll on the fresh wildflower growth.

Soon the hawks will have departed, and the wildflowers returned to earth. But the caterpillars will remain.

Their work is done, and they will begin to burrow into the sand and create protective cocoons. Here they will from their larval form as caterpillars into the adult Sphinx Month, protected by their hard, brown case.

When conditions are right in the spring they will emerge to once again begin the life cycle of egg laying, caterpillar, and cocoon.