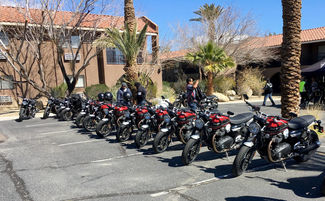 SCRAMBLER 1200 Motorcyles just returned from a test ride in Borrego.

What better way to have motorcycling challenges and fun, on both asphalt and desert terrain, than on a hybrid motorcycle in the greater Borrego Valley?

The 2019 model from Triumph Motorcycles, Ltd., the Scrambler 1200 (1200cc/73ci), with a water-cooled, fuel-injected and hefty 97HP engine (but weighing in at a fairly light 450 pounds), is fitted with liquid suspension and tires that can handle asphalt, sand, dirt, and even some rocks, and it is a candidate for that kind of hybrid fun, on the road and off.

Triumph Motorcycles, Ltd. is a fairly new company, derived from the original back in the early 1900's. It's grown, split up, reorganized several times, but since the '90's it's been all about reinstating the Triumph brand.

Triumph dealers and dealer reps from around the region, in what one referred to as "Dealer immersion," spent time in and around Borrego Springs and Ocotillo Wells, testing out about three dozen or so hybrid "Scrambler 1200" and the "Speed Twin" machines, both of them 2019 models fresh off the assembly lines in England.

After their time testing the bikes on asphalt and off-road, they settled down for meals, conversation (about motorcycles and Borrego/Ocotillo Wells, naturally), and eventually sleep at the Borrego Springs Resort.

On Feb. 21, a day with on and off rain, "Jeremy from Canada" had gone out for a ride in the desert. It was tough going in some places, he noted, especially when the rain picked up, but the new Triumph Scrambler 1200 performed and handled well. His claim to fame for the ride? "I didn't crash!" he said proudly.

Whether on a clear day or in a downpour, on or off the road, that pretty much sums up the ultimate goal of every motorcycle rider.

A pack of riders seeking lunch arrived single-file into the parking lot on Feb. 22, and I had a chance to speak to a few. "Scott," a Triumph dealer in Albuquerque, NM, particularly enjoyed riding out to see the Breceda sculptures.

A mechanical engineer by trade, it was his first time in Borrego, and he seemed to love riding the new model Scrambler on and off the roads.

Ernie Vigil is a professional stuntman, but he also rides for Triumph. He's here to give the new line of Triumphs "an edgy test ride," and he was not shy about rattling off the aforementioned features of the company's new Scrambler 1200 that allow for the environmental rigors of both asphalt and desert terrain.

Note: Ernie Vigil stunted in "Fast and Furious," and he will be (not recognized) doubling for Keeanu Reeves in the upcoming film "John Wick III," released in theaters May 17. Check out "Ernie Vigil Triumph Scrambler" YouTube page.