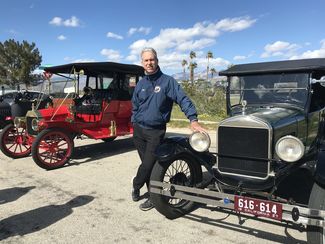 A group from The Model T Club of San Diego drove from Ramona to Borrego Springs Friday March 8.

There were about six cars of vintages from 1911 to 1926 seen near Christmas Circle. In the beginning, Model T's bodies were wood, painted in bright colors by the old carriage makers. They only looked black to us because of black and white photography in the old days.

Henry Ford had them all painted black to speed up production, or an alternate explanation offered by a club member is that he did it because black paint was cheap.

In the early days between 1908 and 1915, all trim was brass, as in the red 1911 car in the photo. The use of brass was stopped in 1915 because it was needed for the war. Alternately, a club member expressed the theory that people were just tired of polishing the brass. Trim was then painted black until 1926, when it was changed to nickel, as in the green car pictured with its owner Greg Rising.

Asked about gas mileage, the answer of 20 mpg was greeted by snorts in the group. Somewhere in the teens is more like it. All the engines here have been replaced with more modern ones. All Model T's had front crank starters, while at least some of these have an in-car automatic starter.

Asked about seat belts, one of the members said he'd rather be thrown out of the car than held in and crushed.

There was no safety structure in the roof support. We've come a long way.