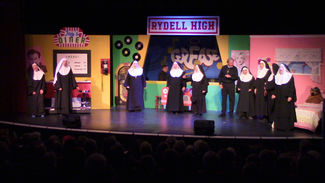 In what has to be the most fun ever for 10 nuns onstage, "Nunsense: The Mega Musical" at the Borrego Springs Performing Arts Center managed to transform the death of 54 nuns caused by botulism in the vichyssoise soup into a romp of hysterical proportions.

"It was kind of like the Last Supper," chuckled Sister Hubert (Lynette Salton), and she adds to the audience laughter with, "That's a little convent humor."

Convent humor makes for a lot of laughs in this story.

Only 48 of the nuns were buried before Mother Superior bought a Hi-Def plasma TV, so they ran out of money. Hence, the audience is witnessing a musical/variety fundraiser at Mount Saint Helen's school auditorium (harbinger of disaster to come?) to send the other four nuns officially off to their heavenly maker before the health inspector shows up and finds the four nuns in the freezer.

A story not found in any biblical reference, Nunsense is irreverent, even bawdy at times, and it takes us to a place heretofore unseen and unheard. For a stage production about nuns, that is. It is, thankfully, a place audiences dearly loved.

Starting with eye-popping set design and construction by Jay Hazelrigg, professional live piano accompaniment by Dick Helvig, a sound system from Dan Caruso that actually works like it's supposed to, and all under the guidance of Artistic Director George Keith, the talented cast kept the thrice sold-out audiences on March 8, 9, and 10 laughing and otherwise highly entertained throughout.

Reprising her role as Reverend Mother Mary Regina, Elaine Hazelrigg is a powerful stage force, dramatically and comically. She owns that stage, especially during her physical antics resulting from ingestion of a liquid substance called rush, relieving her of all inhibitions.

Seeing is still not believing. Even when Hazelrigg lost a bit of her voice in the final performance, she dug deep and, as poet Dylan Thomas implored, did not go gently into that good night.

Salton as Sister Hubert has great command of her voice, and the precise comedic timing to go with. She's like onstage glue that helps bind together the varied musical and staging elements. Knowing every song and lyrics, Salton subbed in seamlessly for Hazelrigg late in the Sunday performance in a cast-rich musical number, "Holier Than Thou."

Rebecca Loomis as Sister Robert Ann, a "street-wise" (read ex-hooker) nun, was a welcome casting surprise with her vocal range, comedic renderings, and an overall stage presence that cemented her qualifications as "understudy" to the Reverend Mother in the fundraiser.

Loomis' understudy moment in the spotlight, "I Just Want to Be a Star," was as good as it gets in any live performance.

Then there's Sherry Herapat (Sister Mary Amnesia), whose faulty memory is a repeat source of humor in the production (onstage and out in the audience). As in previous BSPAC performances, Herapat is a natural, letting her character loose, giving it free reign, and providing sheer joy for the eyes and ears. Unsurprisingly, Herapat also does mini-nun puppetry with the best of however many or few there are in the world.

The supporting cast was superb – on key and with fine harmonies – and helped make this a dynamic, full range production. Elaine Hazelrigg, Lynnette Salton, and Sherry Herapat also served as choreographers, demonstrating their staging/movement chops and giving the production a very professional feel.

Kudos also go to writer/composer/lyricist Dan Goggin for a script of successful theatrical over-reach and his appropriate absence of comedic restraint.

In conclusion, Director George Keith pulled out all the stops on this one, a season high point, wrangling a flock of singing nuns into a production that will surely be a BSPAC staple for years to come.