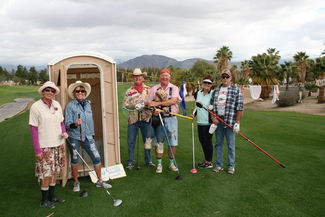 Uncouth. An embarrassment to the game. Public humiliation rewarded, not condemned. But oh, what a great time they had!

51 players, men and ladies in a scramble format, and dressed in what can only be described as truly inappropriate golf attire, showed up for the annual Redneck Open at the Springs at Borrego Golf Course on Groundhog Day, Feb. 2.

For their convenience, portable toilets were spread around the course so as not to afford the Redneck's an excuse to water the vegetation. Old and abandoned tires were placed strategically to determine winners on one particular tee shot. It was not Closest to the Pin, or KP for short, but rather "Closest to the Abandoned Tire Out on the Fairway" – KT perhaps?

The rules of play for the Redneck Open would make serious golfers cringe. As but one example of totally illegal "local rules," male players could improve their tee position by moving up to the shorter, red ladies tees "if they put on a skirt and bra while they drive the ball." Scandalous!

Event co-director Kenny Gorsline and player Mike Rahn took advantage of that rule, but only Rahn's humiliation was captured when he paid the price for his improved lie.

Mass embarrassment out on the course did not prevent the Rednecks from throwing a dinner and "awards" ceremony after their so-called tournament.

To the less uncouth, that means (mostly) cheap wine, new bras and panties, and a couple of decrepit golf totes plus a brand new one thrown in.