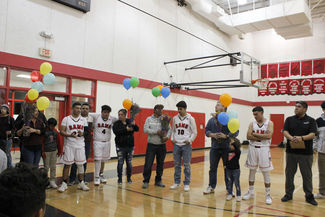 The Rams seemed to be in control to begin the game against Warner Springs, however, the momentum could not be carried throughout all four quarters.

This was also the last game of the season for the Rams.

"It's always rough, always hard for the ending of the season. The last game, the seniors going out this year especially since we have four of them, but it's hard to go out like this," head coach Mauricio Polanco said.

Despite ending the season with a loss, Polanco said the season has been a great learning experience for the players and as coaches.

The Rams also faced the Vincent Memorial Scots earlier in the week, and lost 51 – 12.

The Wildcats were on the board first with a jumper in the paint, with 6:37 on the clock.

The Rams answered right back on their end, with a three-pointer by senior point guard Fernando Alcaraz, 3 – 2.

As one of the Rams driving forces in the paint, Alcaraz went down the middle to force a foul, sending him to the free throw line. After sinking one out of the two, the Rams were still up 4 – 2. The Wildcats tied the game with a layup.

Midway through the first quarter, senior forward Victor Arias swished in a shot behind the arc. This was one of the many he made throughout the game.

Polanco noted that Arias usually makes those shots in practice, and encourages him to do that in the game. Clearly, Arias can make those.

The Wildcats were not going down with a fight. After sinking in a free throw and back-to-back three pointers, they led the Rams, 11 – 7.

In the second quarter, the Wildcats started where they left off, right back on the board, connecting with the basket to extend their lead.

Due to injury and surgery, Padilla and Carmona were unable to play for the final game.

The Wildcats started off the third quarter quick with a jumper at the free throw line, 30 – 13.

They were answered right back with yet another shot behind the arc by Arias at the top of the key.

Midway through the third, with the assist of Alcaraz, Arias with the hot hand again, sank in another three. Twice.

Despite this effort, however, the Rams trailed 39 – 25 heading into the fourth.

It seemed the Rams could not get a shot to sink in when they needed it in the fourth, as the Wildcats continued to connect more and more, extending their lead.

The defense could not stop them.

With two minutes left, the Rams lone three-point shooter did it again. Another three.

Arias finished the game with seven three-pointers, only missing one.

It was a game out of reach, but the Rams never gave up, stepping it up on offense and defense until the final second.

"We're looking forward to the future, and see how much better we can be next year," Polanco said. "It's gonna be hard to replace them, but we have a good batch of sophomores that are coming up, that'll be good for us. The only struggle would be that they have to stay eligible throughout the year, and make sure they can play."