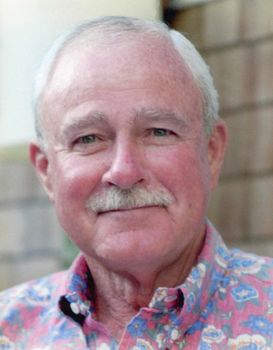 He had survived earthquakes, underwater volcanoes, and sailed through the eye of hurricanes at sea. He was a front-row witness to the closing of World War II; he surfed redwood planks in the Territory of Hawaii. "Baines," as his friends and family knew him, spent more of his life at sea, than on land.

Captain Robert Haines passed away peacefully, January 26, at the age of 92, of complications from pneumonia and pulmonary fibrosis. He was surrounded by his loving family.

Like a Daniel Boone of the earth's oceans, Baines helped chart the undiscovered country – the undersea regions of the world. For more than three decades he worked everything from deckhand to scientist-assistant to skipper on the great ships of the Scripps Institute of Oceanography fleet. And he did so in every weather condition known to man.

Born Robert Bentley Haines, he arrived on Aug. 31, 1926, in Vallejo, California, to parents, Helen Donaldson Haines and John Meade Haines. His father was a Navy submarine officer and recipient of the Navy Cross for valor in combat during the raid on Makin Island (1942).

Baines is descended from a South African President; brother to a Poet Laureate; and sired an Olympic Gold Medalist son.

At two weeks old, his mother and older brother John moved to Coronado and rented a house on the 400 block of C Avenue. Baines attended schools in Coronado (CHS Class of '45), Bremerton, Washington, Honolulu, Vallejo and Washington DC.

He witnessed the end of World War II from aboard the USS Iowa, which was anchored next to the battleship Missouri where the surrender took place.

"My battle station was a five-inch gun director that had a range finder on it, with optical instruments for aiming the guns. So, I put that range finder right on the table where the signing took place, and didn't think much about it at the time, but I saw the entire end of the war taking place before my very eyes – a ringside seat."

He joined Coronado Yacht Club in 1948 and began sailing in earnest. He crewed on the 64-foot yawl, Fair Weather in 1949, 1951 and 1955 for the challenging TransPac race from Los Angeles to Honolulu. In 1974, he was navigator on Nick Frazee's legendary 56-foot sloop Swiftsure. He navigated Merlin in 1981 and missed the speed record by a mere 46 seconds. Baines owned Tabasco, a Cal-39, and for many years delighted in racing her in local races, as well as on cruises with family to Catalina Island.

In 1950, he heard that Scripps Institute of Oceanography was looking for deck hands. His life would never be the same. That was the beginning of a 36-year career and the perfect job for a young man looking for adventure on the sea. He worked his way up from seaman to mate, and then to captain.

In 1952, Baines met his future wife, Barbara Reynolds. They married and had four children, living in Coronado while he spent sometimes as much as nine months at sea working for Scripps. They enjoyed 65 years together raising their family, traveling and sailing.

Baines skippered the research ship Alpha Helix through the eye of a hurricane, and survived numerous typhoons and tropical cyclones at sea. Legendary newsman Walter Cronkite was his guest on board, following a deep submersible dive.

While on one of his lengthy Scripps trips, he took along hardware, materials and instructions on how to build a Sabot sailboat. He and another member of the crew built two of the small boats aboard ship.

"It was a present for my young son Robbie," he said. "When I got back to San Diego I said, 'Come on Robbie, we're gonna go over and get your boat.' I took him over to Scripps and introduced him to his new boat. We sailed it back to Coronado that day, and it was a very special sail. We named it Ropacabu," he laughed. "Because that's the first two initials of all my kids – Robbie, Pammy, Caroline and Bunnie." Robbie went on to win a gold medal in the 1984 Olympics for sailing.

His missions varied from scientific to top secret aboard the ships of the Scripps fleet. In the end, Baines contributed significantly to the research advancements at Scripps, and established an enviable record of having never lost a man at sea and executing his ships' missions repeatedly and flawlessly over three and a half decades.

In 1985, Baines retired. He sailed at least half a million nautical miles in his lifetime. He made more than a dozen Equatorial crossings.

In retirement, Baines spent a lot of his time in Borrego Springs, where his daughter Bunnie lived. He worked with her and her husband Jack at their SoShowMe art gallery, also volunteering at the annual Borrego Days Festival and the Chamber of Commerce.

Private family services are planned. At his request, his ashes will be spread half way between Coronado and the Coronado Islands. On a yellow sticky note he left behind, it specified he wanted his son Robbie to place his ashes at a particular longitude and latitude, where an ocean eddy would keep him forever swirling in the waters he loved to sail, near the family he so deeply loved.

In lieu of flowers, donations may be made to the Coronado Maritime Foundation Junior Program, "In memory of Bob 'Baines' Haines," 1631 Strand Way, Coronado, CA 92118.