Music on the Wing: Jennifer Goodenberger at BSPAC 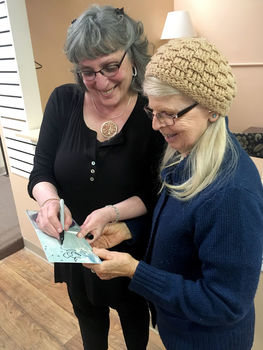 How easy the day's anxieties drifted away right from the beginning of "Lark in the Clear Air," solo pianist Jennifer Goodenberger's opening piece in her BSPAC performance on Jan. 26, entitled, "Bird Notes." And she was relaxed and in fine spirits, too, probably due in part to this venue in Borrego being her "favorite place to perform."

Perform she did, taking the audience on a musical journey of imagination, with birds and their songs the theme, spanning classical, film, and traditional music. Prior to the selection, "Dew in the Grass," near the end of her performance, Jennifer remarked that is was a rarely recorded and performed Celtic piece. But it was upon hearing the piece early in life that she had an epiphany: "I knew I had to be a musician" from then on.

Goodenberger has not only come to be renown as a fine pianist, but her on-stage style keeps her engaged and interacting with the audience between pieces. She offers interesting musical insights, sprinkled with humor, not only giving more depth to the forthcoming music, but also letting the collective audience imagination run as wild as a bird in flight while her fingers grace the keyboard.

The 1962 film, "To Kill a Mockingbird," scored by Elmer Bernstein, opens with a single note. "It's nuanced and intimate," Goodenberger said, explaining that mockingbirds' only desire is "to sing their little hearts out – protect them, don't kill them."

In the film, she pointed out that the characters are as innocent as mockingbirds. It made you want to dash home and watch that film again to catch and better appreciate those dramatic-musical nuances.

Returning later in the program with the film-related bird song theme, this time for "On Golden Pond," Goodenberger asked the audience to listen for the four individual loon calls. There they were – tremulous, hoots, and even a yodel. In the next piece, Alfred Hitchcock's "The Birds," she spoke of the use of silence in the film, and she played an example to reveal how both the silence and the music foreshadowed the initial classroom bird attack.

There was much to this performance in both exposition and musical expression, so a short review like this doesn't do justice to the rich experience of "Bird Songs" brought to a packed theatre audience. All in attendance were very appreciative of Goodenberger's style and range, not to forget grace at the piano.

Jennifer Goodenberger tells a wonderful story to supplement her extraordinary talent. She is a treasure, and Borrego is fortunate to have her.