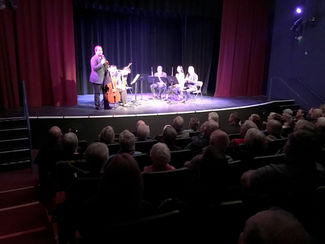 Leave it up to classical musicians to make one look up the term "Aubade" to discover its strictest definition, "A love song at daybreak through a door or window to a sleeping woman." They could have just said that, because now the piece makes total sense.

But the rest of the sold-out performance at the Borrego Springs Community Concert Association's presentation of the Frisson Ensemble: Next Generation Classical at the Performing Arts Center, made a lot of musical sense without explanation. And the audience responded in kind.

Be it on violin, viola, cello, flute, oboe, or clarinet, in solo or combination, the six musicians showed both individual brilliance and collective versatility. The artists also gave explanatory remarks on the piece about to be played (except for the Aubade thing), which helped the audience to better understand what was to come.

Frisson Artistic Director Thomas Gallant on oboe was excellence personified, punctuated by his charm, grace, and especially humor in speaking to the audience. And while every musician did something special on his/her instrument, it was Julian Schwarz on cello that wowed the audience with a cello built in 1743. I'll save you the math: It's 276 years old, built more than three decades before revolutionary Americans declared our independence from Great Britain. Schwarz told the audience how much his cello loved the dry air of our desert, and he showed us via its unique sounds why.

In short, the music was varied, and each of the Frisson musicians was fantastic in their own right. The audience loved it all. Don't miss their performance if they show up again.

Full article in the Feb. 7 issue of the Borrego Sun.