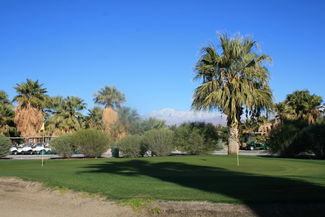 Yes, those light flakes of frozen water that many Borregans find pleasing to the eye when seen visiting the tops of mountains ranges to the south (Velleceto's), west (San Jacinto's), and north (Santa Rosa's). However, on the last day of the old year, in the picturesque town of Julian, the population of 1,500 saw mostly ground-based visitors of the human type flood the town after six inches of snow fell on New Year's Eve day.

Snow-seekers arrived en masse, overwhelming highways and service establishments, after Julian received more than twice the town's average snowfall for the entire month of December. And there was no room in the inn, or any motel or hotel for those without reservations because everything was booked for New Year's Eve celebrations.

For those of us here at lower elevations, the New Year's Eve day event showed up as rain and wind advisories. It was a welcome rain, to be sure, even the half-inch that fell at the Park weather station, bringing our total rainfall in December to 1.6 inches. Good for sheep, golf courses, plus a brief and almost imperceptible respite from aquifer depletion.

Snow is nice. To appreciate from afar, anyway.

Full story in the Jan. 10 issue of the Borrego Sun.