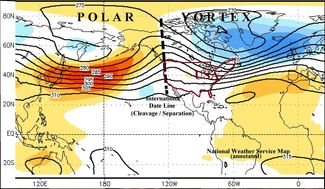 Back in the second week in December, a Borrego weather forecast for Christmas Day said it was going to rain. Ha! That specific, really? It was sunny with not a cloud in the sky How could they possibly know that? Then sure enough, it rained on Dec. 25 in Borrego, but only between .01 to .02 inches. Still, so much for scoffing at the latest meteorology forecasting.

Similarly, climate scientists have also predicted the date of Saturday Dec. 29, 2015, when an imminent weakening of the Polar Vortex, followed by a rather complete "collapse," will cause a dip in the jet stream (220 mph), resulting in snow and cold for the East Coast and more rain for California after Jan. 10, 2019, all the way into March. Folks expecting to travel east would be advised to take their word on that one, too.

Climate change is the stated reason for these predictions, based on a Chinese study for the current issue of Nature. Warmer air resulting from melting sea ice around the polar region (only a degree or two, but it's enough) has weakened the Vortex, and everyone in North America east of the Rockies should be bracing for it.

The Polar Vortex is a system of extremely cold air, sitting over the North Pole like a thick, upside-down dinner plate, kind of like a flattened air bubble up in the stratosphere. Now imagine that a knife is pressing down on the middle of the bubble near the International Date Line (west of Alaska) and over the pole, essentially cleaving it in two.

By Jan. 10, a 1,000 mile wide by 18-mile high wall of Arctic air, like a giant, slow-motion waterfall, will begin spilling its cold air down into Northern Canada, then the States, from the Great Lakes to the Eastern seaboard, perhaps as far south as Florida. The Polar Vortex cold-air phenomenon is not expected to affect Borrego Valley, except by way of warmer air pushing the colder Vortex air east, allowing for the previously mentioned additional rainfall for us here in Borrego that is said will last up to Spring.

Good for wildflowers, sheep, and landscape/golf course irrigation, and it couldn't hurt our aquifer recharge, either, if enough makes its way down Coyote Canyon and the others.