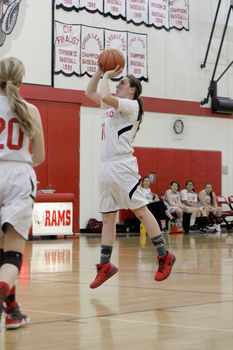 After shutting out the Lady Roadrunners of Calexico Mission School in the first half, and holding them to single digits, the Lady Rams basketball team sealed a 42 – 7 win at home Dec. 19.

"They played well, and any time you leave with a win is nice to have that on your belt," head coach Justine Smiley said. "There are a lot of little things I still want to see them clean up, especially with league coming up against Julian."

To start the scoring off in the game, senior point guard Vanessa Rodarte shot a jumper on the right side, 2 – 0.

The second quarter started with yet another steal by Manzano, but carried on slow, as both teams could not find a rhythm to get a shot in. The Lady Rams led 19 – 0 heading into halftime.

With seven minutes to go in the third, the Lady Roadrunners finally got a shot in after a soft floater in the paint, but were still down 21 – 2.

With the clock winding down, 10 seconds left, a shot at the arc off the backboard for a three for the Lady Roadrunners capped off the third quarter. The Lady Rams led 32 – 5.

With a dominating lead, the game progressed slowly, as the Lady Rams remained control of the game, and extended their lead. The Lady Roadrunners managed to get one more shot in with less than 30 seconds left in the game.

Despite the 42 – 7 win, coach Smiley said there are still some things to work on.

"Aside from fundamentals, we need to work on the depth of our bench. The girls that we have are new, getting them on a night like tonight, more experience for them, is gonna take us further into league because then we have fresh legs for tough teams," Smiley said. "There's always so many things you can do to prepare, but they need to be ready mentally and physically."

The Lady Rams are back in action at West Shores against the Lady Wildcats 5 p.m. Jan. 11.