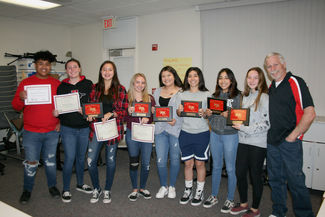 They will be back! As good as the Borrego Springs Girls Volleyball team was this season, with an overall 15 – 7 record and 7 – 5 in League play, watch out for them next year.

With the exception of graduating senior and this year's MVP Camila Hernandez, every player who received an award (see photo) will be returning next season. The gleam in Coach Rick Rethoret's eye was obvious.

For both team members and their family members attending the event, the coach generated a sense of urgency, saying, "High school will be the fastest four years of your lives. Enjoy them together."

From left to right, team members and their awards are as follows: