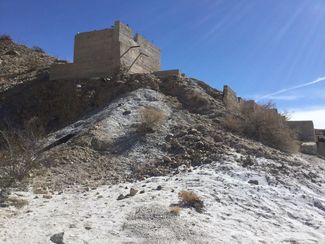 The Dolomite Mine Ruins in Anza Borrego State Park date back to the 1930s and is a hike not to miss. The peak above the Mine is one of the easiest peaks in the park and considered moderate with some small boulders to enjoy a short scramble across the rock strewn ridge to the rounded summit. The elevation is 1850 feet.

Turn off at the signed exit on mile 53.3 via S-2 and a reasonably easy drive up to 400 yards before the Mine awaits and where there is roadside parking available. It is an out and back trip that conveniently connects with the North Mortero Wash 4WD for an optional exit.

Once a Dolomite Marble and Magnesium Calcium Mine, this old structure is an intriguing place to explore. There is an impressive overlook across the Carrizo Badlands and beyond to the hazy Yuha Desert and Salton Basin.

To the lay person, running your hands through the pure white fine powder that is still present to this day, brings to life the rich mineral deposits of ancient and metamorphic rocks overlain by marine sediments.

Some five million years ago, much of this same landscape lay below sea level and underneath a shallow sea occupying the southern eastern corner of California.

The tectonic forces that have been documented relate to the time that tore Baja California away from mainland Mexico. The erosion that has since taken place is very much a matter of observing the obvious of much older underlying metamorphic and granitic rocks poking their head and shoulders above all the softer residue.

The magic view from the overlook and the ever present Ocotillo and Creosote bushes that are dotted across the terrain, is very much significant of Anza-Borrego State Park. So whatever compelling reason you go hiking, one can be rest assured that the desert will always deliver its austere and forbidding appearance.

It is a special place of cultural interaction as well as having respect for the force of nature that is ongoing and apparent. We are living in an age of combining ancient wisdom with the contemporary life of modern society and there is always a margin of error!

Nature planned it that way!