Out and About in Borrego 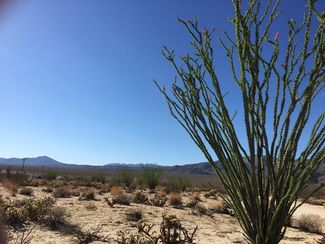 The ocotillos are blooming early this year helped by the day of rain, with tourists already arriving to take a look.

After taking a short break from USCAL San Diego, two friends, Jeremy and Candy, wanted to see Borrego and the Anza state park. "We live in Eastern China and there is nothing like this over there." stated Jeremy. "We've never seen the desert before and it is just magnificent." Candy was amazed by the clear skies and how magnificent the stars are. Unfortunately they were leaving after just one day but were already planning their next trip out. 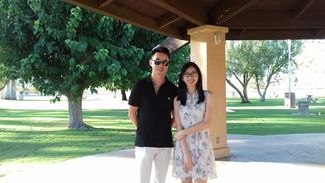 Jeremy & Candy in the Christmas Circle

Snow boarding and dirt biking are both fast and furious sports, Ocotillo Wells being the perfect location to let loose across the sand for Canadian Blair, who is on a break from the snows of Whistler. "I was talking to people in Oregon about where to ride my bike next. They suggested Ocotillo which I had never heard of. Turns out it's kind of famous." he laughed. "I've seen no one out there and it's been incredible. "

Nick and Abbey are friends and writers from Los Angeles. They googled 'the best hiking day trips' and Borrego Springs popped up. Last night they were enjoying the drinks at the Borrego Springs Resort after a day of hiking. " It's beautiful' said Abbey, "we were the only ones up there."