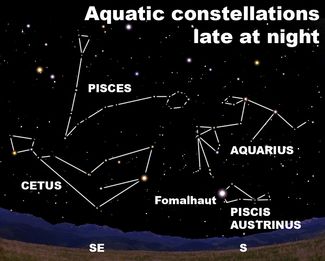 After the flooding that some of our nation experienced this summer, I almost hesitate to bring this up. But of the 88 constellations that fill our night sky, 15 are somehow associated with water.

Of those 15, several shine in our southern sky after dark this week. To see them, however, you'll need to retreat to a rural area far from city lights. One of the largest and most prominent of these is the constellation Aquarius. Look for this relatively faint star grouping high in the southeastern sky late at night this week.

Aquarius forms a small Y-shaped pattern that we know today as the water-bearer or water jar, though sky watchers often depict it as a standing man pouring liquid from a jar. Try to trace that form in the sky, however, and your hair will turn as white as mine.

The figure of Aquarius first appeared on ancient Babylonian stones, but it seems to have represented water in many ancient cultures, including Persia, Israel, Syria, Turkey and Arabia. Ancient Egyptians, for example, knew it as Monius who filled his giant urn by descending into the Nile River and causing it to flood each June -- when Aquarius appeared overheat at midnight.

Of course, one would expect that where there's water, there's fish. And sure enough, that's true in the heavens as well. A quick glance to the east of Aquarius reveals the constellation Pisces, the fishes that are supposedly tied together with rope. More precisely, though, it should be called the northern fishes because there's also a constellation of the southern fishes (Piscis Austrinus) just south of Aquarius. If you thought it was tough to outline the namesake of the northern fishes, get ready for some fun! Fortunately, a bright star named Fomalhaut marks the constellation and makes it much easier to find.

Just below Pisces swims one of the largest creatures in the sea: Cetus, the sea monster or whale. Cetus is said to be the beast that Poseidon sent to plague the king Cepheus when the queen Cassiopeia claimed to rival the Nereids in beauty. He was placed in the heavens to commemorate Poseidon's heroic deed. With some imagination, one might almost be able to make out the whale's huge body, and its tail and fluke stretching toward the east.

Pay close attention to the nighttime sky throughout the year and you'll discover many more of these watery constellations: Delphinus, the dolphin; Dorado, the swordfish; Carina, the ship's keel; Hydra and Hydrus, the water snakes; Vela, the sails; and many more. Stargazers in the Northern Hemisphere can see some of these constellations in their entirety, and others only partially. From south of the equator, some can be seen entirely. All have rich histories that date back centuries, and often millennia. Their stories are fascinating to learn.

This week is a great time to get outside under a dark sky and begin your search. Without the obscuring light of the moon during early evening hours, you'll have a wonderful time seeking all the aquatic constellations. Who knows? Perhaps you'll even make up a few of your own!