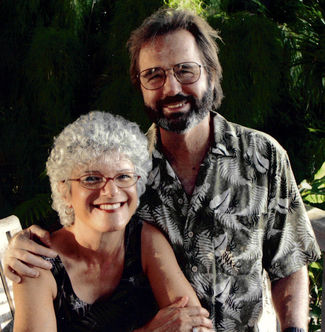 "Living with cancer" is the best description, because despite the inevitable sadness and struggles, Dave remained as cheerful and active as humanly possible, surprising his doctors by running a 6K nine months after his diagnosis, walking and gardening nearly every day until the very end, and regularly hosting family and friends – even if he had to host them from a prone position.

Born and raised in Lake Charles, Louisiana, Dave graduated from Notre Dame, then went on to law school at UC Berkeley. He practiced law in Santa Barbara before moving to San Diego where he worked for several high tech firms as general counsel. He was his own boss for many years after that, building a client list, working at computer law, and happily setting his own schedule. He met his first wife Mary Van Anda while at Notre Dame; they were married for twenty-three years and had three sons, Jim, John and Mark.

Dave maintained the South in his soul long after he moved to California. He made an excellent gumbo, loved Cajun music, and stayed connected with his high school buddies. He liked hot weather, and humidity was just fine with him too. His best times were the times he spent outdoors, camping with his kids and grandkids, running, walking, surfing, swimming, biking, fishing, diving, or just gazing at the stars.

Right around the time his suit-and-tie days ended and he'd settled into a little surfer shack at Wind 'n' Sea, Dave met his soul mate Lynn. They lived and played at the beach and married four years later. During the twenty-nine+ years they spent together, they enjoyed gourmet food and fine wine, travel and hiking, and exploring Baja and the Anza-Borrego Desert.

Besides the love they shared for the good life and each other, Dave's greatest passion was gardening. For years, he focused on tropicals, going on collecting expeditions in various jungles, scouting nurseries for interesting specimens, and ordering plants online. For a time he ran a plant business, "Banana Dave's Select Tropicals," selling to customers including Sea World, the San Diego Zoo, and other collectors. When he and Lynn moved to Borrego Springs in 2006, he turned his attention to desert plants and created yet another beautiful garden around the home he and Lynn designed together, the place he liked to be best of all.

Dave will be greatly missed by those surviving him, including his wife Lynn Pierce; son Jim Lloyd and his wife Diana; son John Lloyd; son Mark Lloyd and his wife Teresa; grandchildren Derrick, Chris, Jake, Alec and Ella; siblings Jerre Lloyd, Jolynn Fogarty, and Evelyn Berges and her husband Bob; nieces and a nephew; and many dear old friends including Louisiana classmates too numerous to name.

The immediate family will remember Dave when they gather at his favorite campsite near Borrego Springs and share thoughts and memories. No viewing or services will be held, at Dave's request.