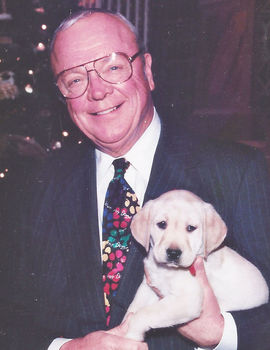 Richard D. Graffis died peacefully at home in Orinda, Calif. on April 26. A resident of Orinda and Borrego Springs, he was born on May 22, 1932 in Albany, Calif. before moving with his family to Alhambra, CA where he attended elementary and secondary schools.

Mr. Graffis graduated from the University of California, Berkeley in 1954 with a degree in Business Administration/Accounting, following service in the US Navy during the Korean War. An undergraduate member of the Kappa Sigma Fraternity at Cal, he remained active in local chapter governance for over sixty years.

Following graduation, Dick began his career in accounting with Touche, Niven, Bailey and Smart. He moved to the securities business in 1963, initially with Dean Witter, then spent the next fifty years as a successful investment manager in Oakland, San Francisco and Fresno. Later in his career, he created and managed RKP Investment Advisors. For many years, he presented on-air daily stock market updates for several Bay Area radio stations, including KSFO and KFRC.

Mr. Graffis was an enthusiastic volunteer and leader for a number of charitable organizations, including Guide Dogs for the Blind (for which he served for over ten years including a two year stint as Board Chairman); the alumni board of the Kappa Sigma Fraternity at U.C. Berkeley; the Senior Golf Association of Northern California; and was a long-serving chairman of the Borrego Community Health Society, an endowment fund for health clinics in the Borrego Valley. In addition, Dick belonged to the Orinda Country Club, de Anza Country Club, and for more than thirty years, was an active member of the Bohemian Club and Dog House Camp.

Most of all, Mr. Graffis dearly loved his family and their interests and activities. They will always miss his humor, love and sense of adventure. Mr. Graffis is survived by his wife of sixty years, Ann Moreland; three sons and their wives, Rick (Donna), Kevin (Leslie) and Patrick (Veronica); nine grandchildren; and nephews Greg and Mark Jackson. He was predeceased by his parents, Philip and Phyllis (Wylie) Graffis, and sister, Betty Jackson.

A private graveside service will be held later this month; donations may be made in his memory to Borrego Community Health Society (P.O. Box 2714, Borrego Springs, CA 92004-2714) or a charity of your choice.