Seeing Red in the Night Sky 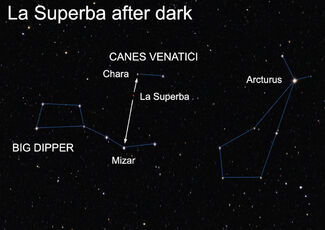 To find La Superba you'll need to locate the Big Dipper, now standing high overhead, and just above it, the two most prominent stars of Canes Venatici, the hunting dogs.

Beginning stargazers are often disappointed when they cannot see the glorious colors that appear in celestial photographs taken by massive telescopes. Experienced sky watchers know that this is because the human eye's color receptors (the cones) do not respond well under faint light. Anyone who has ever sat in a dimly lit room has experienced this phenomenon.

This can be disappointing for novices who peer through a telescope at the wonders of the heavens. Star clusters, nebulae and galaxies appear mostly colorless, despite what some telescope manufacturers imply by printing colorful photos on the telescope packaging.

But this doesn't mean you can't see colors in the night sky. In fact, if you glance around the sky tonight, I'll bet you'll find at least one colorful star. Most likely you will spot Arcturus, a brilliant yellow-orange star midway up in the eastern sky after dark. Arcturus, in the constellation Bootes, is an orange giant star nearing the end of its stellar life.

So why, then, can we see the color of Arcturus but not that of most other celestial objects? Because its light is both bright and concentrated into a point rather than being spread out, as is the case with nebulae and galaxies. Aim binoculars or a small telescope in the direction of Arcturus and you'll see its color even more prominently; this is because the optics will gather much more light than your eye and will help stimulate your color receptors.

Now if you'd like to see an even redder star, you'll need to cast your gaze high overhead after dark this week. Here lies a star that astronomers know as Y Canum Venaticorum. Normal people just call it La Superba (the magnificent), so named by the mid-19th-century Jesuit astronomer Angelo Secchi.

To find La Superba you'll need to locate the Big Dipper, now standing high overhead, and just above it, the two most prominent stars of Canes Venatici, the hunting dogs. About two-thirds of the way between the bend of the Dipper's handle (Mizar) and the western most star of Canes Venatici (Chara), lies a very faint star – one you may not be able to spot with your eyes alone from near the lights of a city. Don't worry, though; binoculars or a small telescope aimed in its direction should solve this problem.

La Superba is a star with a diameter 342 times that of our sun; if brought to our Solar system, it would engulf the sun along with the orbits of Mercury, Venus, Earth and Mars.

What makes this star unique is that it's what astronomers call a carbon star, one of the few visible to the unaided eye. Yes, it's a giant star like Arcturus, and is also nearing its death, but, unlike "normal" such aging stars, La Superba has accumulated more carbon compounds in its outer atmosphere. Eventually – as do all similar stars – La Superba will eject these outer layers into space in a series of eruptions and will end its life as a tiny white dwarf star.

But for now, it's red. Very red. And if you aim binoculars or a small telescope in its direction, you'll be delighted by what you see.