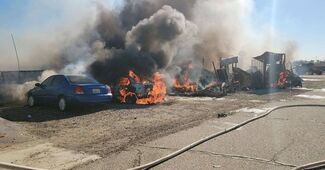 A fire turned deadly as it destroyed multiple homes, and claimed the lives of three people on Nov. 26 within the Desert Shores Trailed Park near the Salton Sea in Imperial County.

At around 8:30 a.m., the Imperial County Fire Department and Office of Emergency Services Station number nine located in Salton City were dispatched to a report of a trailer on fire in the 100 block of Desert Shores. While in route, crews were informed of an additional trailer catching fire, Responding Captain onboard Engine 9 requested a second alarm to the incident. Information continued to pour in and stated that there were trapped victims in the first trailer. Engine 9 arrived on scene at 8:47 a.m., 12 minutes after being dispatched and encountered a total of three trailers on fire with immediate exposure to others.

Crews took a defensive attack to stop the progress and eventually contained the fire to a total of eight trailers. During the overhaul of the incident, a total of three bodies were found and included an adult male and two juvenile victims. The Imperial County Sheriffs Corner was dispatched for processing of the bodies. They were later identified as a father and his two children – 10-year-old boy and 14-year-old daughter.

At this time the cause of the fire is still under investigation.

This is the second recent fire to destroy multiple homes at that mobile home park.