My Favorite Star of Summer 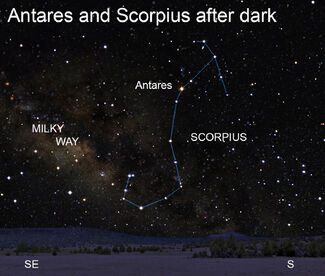 "If you've seen one star, you've seen 'em all." That's a phrase I've heard many times over my long astronomy career.

I suppose it's true to one who seldom peers at the nighttime sky. It's too bad, though, because we who spend more time looking up than down know there are few statements further from the truth.

It may also be tough for some to imagine that one could actually have a favorite star. But I do, and I'd be willing to bet that many experienced stargazers do as well. The reason, you see, is that stars – like people – have their own personalities. Once we get to know them as individuals, we see the many charms and quirks that are unique to them. The trouble is that most of us never make the effort to get to know the stars on that level. And that's a cosmic shame.

What's my favorite star, you ask. It is Antares, the brightest in the constellation Scorpius, the scorpion, which appears low in the southeastern sky during the late evening this week. With all the stars in the heavens from which to choose, why would I choose this particular one? I think of Antares as my favorite because I remember watching it intently as a child.

Antares was a star visible in the summer sky when school was out, and the weather was warm. Often during my childhood, there was the smell of freshly mown lawns in the air, and folks were out around the neighborhood. Lying back on the cool grass of my backyard, I gazed wide-eyed as Antares rose above the Coursen's house and shone its ruddy glow through the sultry haze of summer.

I appreciate these warm and comforting memories from such a magical time of discovery. Even today – wherever I find myself on this huge planet – as Antares appears in the sky after dark, I get a smile on my face as I joyfully greet my closest celestial childhood friend and reminisce about the wonderful times we've spent together.

Today, of course, I recognize Antares as a red supergiant that is nearing the end of its stellar life. The star is so huge that if it were brought to our Solar system and placed where the sun is, the star's atmosphere would engulf the orbits of Mercury, Venus, Earth and Mars, and it would extend halfway to Jupiter. It's so distant that the light we see tonight has been traveling through space for more than half a millennium.

In other words, if there were a race of stargazers on a planet orbiting this aging and dying star – something that is quite unlikely, by the way – and they had a telescope capable of monitoring activity on Earth, they would, right now, be watching the early decades of the Italian Renaissance in real time. Now, how cool is that!

To me, it's all these marvelous bits of information that make a star like Antares even more personable. So, the next time you're out gazing at the glistening stars and feel a tendency to dismiss them as being "all alike," take some time to get to know them as individuals.

After all, stars are people, too!